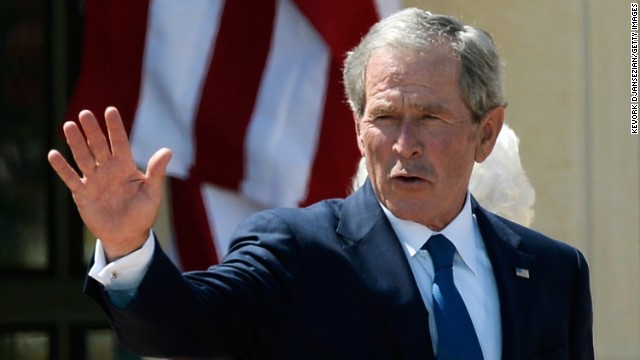 (CNN) – Asked whether President George W. Bush's work with veterans helps him cope with what happened in Afghanistan and Iraq - two wars that started during his presidency - the former President said there's "no question it helps."

"I have a duty," he continued in an interview that aired Sunday on ABC's "The Week." "Obviously, I get slightly emotional talking about our vets, because I have an emotional - I'm in there with them.

"My spirit is always uplifted when I visit with vets," he added. "There's no self-pity. We've got a society that's incredibly comfortable and too many people saying, 'Oh, man, woe is me.' Not our veteran community. They don't say 'woe is me.' They say 'What can I do to continue to serve?' "

Bush keeps a low profile but occasionally emerges in the spotlight, mostly to highlight veterans, whether that's through a public event or simply playing golf or going mountain biking with wounded veterans.

Bush headlined an event last week drawing attention to a need to bridge what he called the "civilian-military divide."

It's "troubling" that 84% of veterans say the public isn't aware of the challenges they face and that 71% of Americans agree, Bush said, citing a survey by the Bush Institute and Syracuse University to be released this year.

Speaking at the George W. Bush Presidential Center in Dallas with second lady Jill Biden, Bush called on higher education institutions and employers to do more when it comes to educating and hiring veterans.