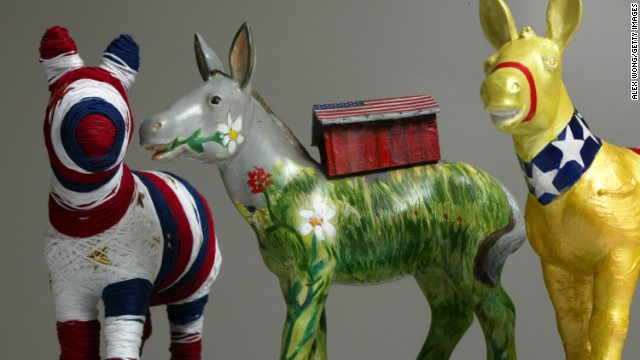 For 2016, Democrats hunt for a convention city

Washington (CNN) – As many as three dozen mayors from Atlanta to Sacramento received a letter earlier this month inquiring whether their cities were interested in hosting the 2016 Democratic National Convention.

It was no small request.

Hosting a national political convention comes with a hefty price tag, between $50 million to $60 million, but the payout could be triple the investment or more.

"Hosting a national convention can be a great economic boon for any city," DNC Chairwoman Debbie Wasserman Schultz wrote in a note to the mayors, which was obtained by CNN. "Past conventions have injected approximately $150 million to $200 million directly into the host city's economy."

Wasserman Schultz did not provide a specific dollar figure that a host committee must raise but emphasized that the "financial package is a key component" for the party when it selects a city.

Tampa hosted the 2012 Republican National Convention, which was cut short one day because of a hurricane threat. Democratic Mayor Bob Buckhorn still considered it a success.

"I think for us, it was a defining moment," Buckhorn said in a telephone interview. "We are a midsize American market. We are not of the magnitude of New York, Chicago or Los Angeles. For us, this was a big deal.

"The fact that we pulled it off in the face of a hurricane with very little drama, I think will pay dividends for us in years to come psychologically, emotionally and financially."

Buckhorn estimates that the short-term economic impact to the Tampa area was "well beyond $200 million" and that the "longer term impact for Tampa and the residual affect in tourism and convention business will be significant."

One city making an early bid for the Democratic convention is Columbus, which is hosting a cocktail reception Thursday at the DNC meeting in Washington with the stated goal of trying to convince Democrats that Ohio's capital city is the place to spend a summer week in 2016.

"As Ohio Goes … So Goes the Nation …,"reads an invitation to the reception that was provided to CNN.

The invitation also highlights several reasons why Democrats should choose Columbus, including:

"Politically, the mayor likes to say, 'The road to the White House goes through Columbus,'" said Tyneisha Harden, a spokeswoman for Coleman.

Cities interested in making formal bids for the RNC convention must submit the paperwork by Wednesday.

Meanwhile, among the cities that received letters from the DNC are:

While Wasserman Schultz noted that the letter is "our very first step" in beginning the selection process of choosing a convention city, a nine-page summary listed some of the minimum requirements needed to hold such an event.

The DNC also emphasized its strong ties to organized labor in the memo, writing, "It is a top priority of the DNCC to contract with hotels whose employees are unionized."

Later in the memo it said that before a contract is signed, "there must be in place an agreement among the City, the DNCC, and the City's central labor council and/or the relevant local unions of jurisdiction, providing for use of union labor for all trades involved in Convention, construction, production, transportation, and other operations, for which such labor is available."

In addition to Columbus, Atlanta, which hosted the 1988 Democratic National Convention, has also shown early interest.

"We are seriously considering moving forward in the bid process, and we are honored to be in the running," said Melissa Mullinax, spokeswoman for Mayor Kasim Reed. "Atlanta is a great city."

Although Sacramento is interested in hosting a convention, the lack of hotel rooms is likely to prevent the city from making a bid this time.

"Of course we're very interested in hosting a national political convention," said Ben Sosenko, press secretary for Mayor Kevin Johnson. "We've been studying the criteria to be one of the host cities, and if it doesn't happen in 2016, then we'd certainly like to be considered in 2020."

Buckhorn doesn't think Tampa will make a run at the 2016 Democratic convention, in part because of the tough restrictions Democrats put on host cities in terms of raising corporate money.

"The DNC puts a lot of requirements on cities that I would not be particularly happy with," Buckhorn said.

Cities that are interested in hosting the Democratic convention were told to contact the DNC by March 1.