“Thankfully the governor of Arizona has vetoed the discriminatory legislation that was passed, recognizing that inclusive leadership is really what the 21st century is all about,” Clinton said to the 6,000 people who assembled at the south Florida institution.
END_OF_DOCUMENT_TOKEN_TO_BE_REPLACED

(CNN) - Senate Majority Leader Harry Reid fired away Wednesday at political ads hitting Obamacare funded by the billionaire Koch brothers that he says are all "untrue."

Reid later eased off some of his comments, but continued to pile on criticism of Americans for Prosperity.

That group, backed by conservatives Charles and David Koch, has flooded airwaves with ads attacking vulnerable Democratic senators up for reelection and Senate candidates for their support of Obamacare.
END_OF_DOCUMENT_TOKEN_TO_BE_REPLACED 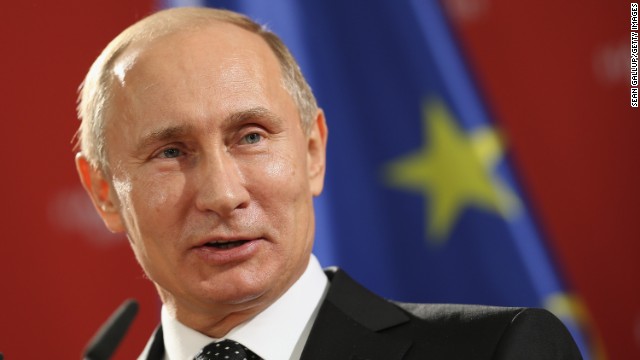 And she believes the United States needs to support a "unified Ukraine" with no division between the east and the west of that country.
END_OF_DOCUMENT_TOKEN_TO_BE_REPLACED

The Office of the Inspector General’s report essentially boosted a critical document in the debate - the State Department’s environmental review, which forecast that the project would have minimal environmental impact.  The inspector general dismissed complaints that the review was biased, finding it was handled properly, with standards sometimes “more rigorous” than required.

Environmental groups complained that some contractors who worked on the environmental study had also done work for TransCanada, the company which hopes to build the pipeline.
END_OF_DOCUMENT_TOKEN_TO_BE_REPLACED

The documents, numbering approximately 33,000 pages and spanning the eight years of Bill Clinton's presidency, consist of confidential communications between the former Democratic President and his advisers, and potentially then-first lady Hillary Clinton.

The release would also include documents pertaining to the former President's appointments for federal office.
END_OF_DOCUMENT_TOKEN_TO_BE_REPLACED

"This is the beginning of the conversation," House Speaker John Boehner told reporters. When asked about the tax increases in the draft, he dismissed the question, answering, "Blah, blah, blah, blah."
END_OF_DOCUMENT_TOKEN_TO_BE_REPLACED

Orlando (CNN) - Hillary Clinton backed efforts to alter Obamacare on Wednesday, but also used her remarks to a health care group in Florida to offer a full defense of the sweeping and controversial law.

“I think we are on the right track in many respects but I would be the first to say if things aren’t working then we need people of good faith to come together and make evidence-based changes,” the former secretary of state and possible 2016 presidential candidate said.

In particular, Clinton pointed to issues with “small business of 50 or more” providing coverage to their employees, and businesses “moving people from full-time work to part-time work to try to avoid contributing to their health care” as issues that should be addressed.
END_OF_DOCUMENT_TOKEN_TO_BE_REPLACED

BREAKING … COLORADO SENATE RACE JUST GOT A LOT MORE INTERESTING: John King reports: Colorado Rep. Cory Gardner, a Republican elected in 2010, has decided to run for Senate, two sources tell CNN.  The 39-year-old Gardner joins a crowded field of Republicans seeking the GOP nomination, and will be considered a serious contender for the nod. Among those in the race are Weld County District Attorney Ken Buck, state Sen. Owen Hill, and state Rep. Amy Stephens.

The winner of the June 24 GOP primary will face Sen. Mark Udall in November. Udall was elected in 2008.

Just last year Gardner stated he would not run for the Senate in 2014, but as the political landscape appeared to be getting better for Republicans he reconsidered, said one of the sources, who spoke on the condition of anonymity.

Republicans only need a net gain of six seats to win back control of the Senate chamber in November.

REID:  “What is going on with these two brothers who made millions of dollars last year in an attempt to buy our democracy is dishonest, deceptive, false and unfair. Just because you have huge amounts of money you should not be able to run these false, misleading ads by the hundreds of millions of dollars. They hide behind all kinds of entities, Mr. President.  It’s not just their front organization, American for Prosperity. They give money to all kinds of organizations Lots of money. See when you make billions of dollars a year, you can be as immoral and dishonest as your money will allow you to be. It’s too bad they’re trying to buy American and it’s time that the American people spoke out against this terrible dishonesty of these two brothers who are about as un-American as anyone that I can imagine.”

AND THE RESPONSE… From Philip Ellender, Koch Companies Public Sector, LLC: “We are disappointed, but not surprised, that Senate Majority Leader Reid has once again falsely attacked Charles Koch and David Koch today on the Senate floor. The Democrats in general and Senator Reid in particular have targeted Charles Koch and David Koch and tried to silence their disagreement on important public policy issues since 2010.”

CRUZ MISSILE … CRUZ ANGERS GOP COLLEAGUES –AGAIN. Ted Barrett and Dana Bash report: Several Republican senators said Wednesday they were surprised and angered after a news report revealed that their GOP colleague, Sen. Ted Cruz of Texas, made a recent fundraising appeal for a tea party group that is trying to defeat GOP incumbents it doesn’t believe are conservative enough.

The senators said Cruz’s efforts appeared to violate his own pledge to no longer target sitting Republican senators in favor of tea party-backed candidates in the hard-fought 2014 campaign in which Republicans believe they have a chance to win back control of the Senate. In addition, the fundraising appears at odds with Cruz’s position as Vice Chair of the National Republican Senatorial Committee, the organization that works to elect and re-elect Republicans to the Senate.

“I am stunned that Sen. Cruz is involved in this fundraising effort for a group that has targeted his colleagues in the Republican caucus,” Sen. Susan Collins, R-Maine, told CNN. “I’m particularly surprised because I thought he had agreed to no longer engage in that kind of activity of supporting groups that were targeting people he serves with every day in the Republican caucus.”

Collins is running for re-election but doesn’t appear to be a target of the group for whom Cruz did the appeal.

CHRISTIE: WHAT, ME WORRY?

WATCH ME THROW THE POLLSTERS UNDER THE BUS … Gov. Chris Christie drew laughter from a room full of New Jersey residents when he cracked wise about poll numbers:   "The only two professions in America where you keep getting paid even when you are always wrong affect my life everyday - pollsters and weathermen," said the Governor, as snow came down in Long Hill, New Jersey.

“I mean, they don’t ever have to have it right and then they come back the next day and they sound just as authoritative as they used to right? It’s crazy.” – Ashley Killough

BUT PERHAPS HE SHOULD WORRY … LESS THAN A THIRD OF REPUBLICANS WANT CHRISTIE TO RUN … More Republicans say they wouldn't like Chris Christie to run for president in 2016 than those who say they want him to launch a White House bid, according to a new national poll released Wednesday … Forty-one percent of Republicans questioned in the poll say the New Jersey governor should not run for the GOP nomination in 2016, while 31% say Christie should launch a bid.

… AND A CHENEY DISSES RAND PAUL

IN THE STATES … Texas' ban on SAME SEX marriage ruled unconstitutional … A federal judge has struck down Texas' ban on same-sex marriage, ruling Wednesday it has no "rational relation to a legitimate government purpose." The decision is the latest in a series of federal and state court moves to overturn current laws forbidding gay and lesbians from legal wedlock.. – Bill Mears

TEXAS GOV. RICK PERRY AFTER THE RULING: "Texans spoke loud and clear by overwhelmingly voting to define marriage as a union between a man and a woman in our Constitution, and it is not the role of the federal government to overturn the will of our citizens. The 10th Amendment guarantees Texas voters the freedom to make these decisions, and this is yet another attempt to achieve via the courts what couldn't be achieved at the ballot box. We will continue to fight for the rights of Texans to self-determine the laws of our state."

THE BUZZ: PAPAL INTRIGUE  As the anniversary of his surprising resignation approaches, Pope Benedict XVI has rejected as “simply absurd” the speculation that he was forced to step down, and he said he still wears the distinctive white papal cassock for “purely practical reasons.”

“At the moment of my resignation there were no other clothes available,” Benedict wrote in a brief letter to an Italian journalist that was published on Wednesday. – Religious News Service’s David Gibson

END_OF_DOCUMENT_TOKEN_TO_BE_REPLACED

Keystone pipeline may be headed for further delay

Washington (CNN) - A debate of more than five years could stretch even longer with Wednesday's call for a health study on the proposed Keystone XL oil pipeline from Canada.

Two Democratic senators - Barbara Boxer of California and Sheldon Whitehouse of Rhode Island - urged Secretary of State John Kerry to examine higher rates of cancer and other illness reported in places impacted by the "tar sands" oil from northern Alberta.

Their letter to Kerry sought to further delay the project that has support from Republicans, some Democrats, the oil industry and labor unions. A Pew Research Center poll in September showed 65% of respondents favored building it.

So why is this still being debated?

(CNN) - Several Republican senators said Wednesday they were surprised and angered after a news report revealed that their GOP colleague, Sen. Ted Cruz of Texas, made a recent fundraising appeal for a tea party group that is trying to defeat GOP incumbents it doesn't believe are conservative enough.

The senators said Cruz's efforts appeared to violate his own pledge to no longer target sitting Republican senators in favor of tea party-backed candidates in the hard-fought 2014 campaign in which Republicans believe they have a chance to win back control of the Senate.