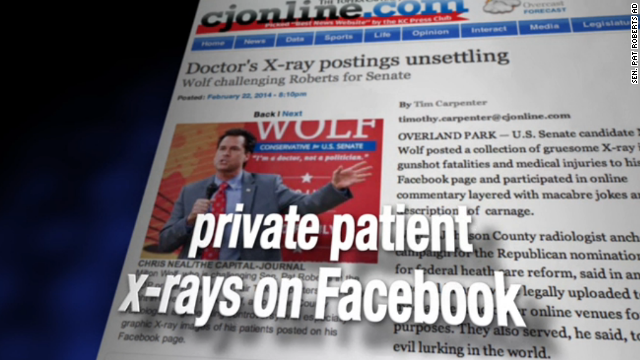 "Dr. Milton Wolf's patients trusted him, but stunning news reports show that Wolf exposed private patient X-rays and other personal information on Facebook – where Wolf relentlessly poked fun at the dead or wounded. A Kansas City medical ethics expert called Wolf's behavior 'beyond alarming' for a professional in the field of medicine," says the narrator in the 30-second spot.

The ad concludes with the narrator saying "If Milton Wolf is so irresponsible as a doctor, how can he possibly be trusted as a U.S. senator?"

Wolf, a radiologist, issued a statement Sunday admitting he made "insensitive" comments about X-ray images he posted online, including an image of a person decapitated by gunfire.

"Several years ago, I made some comments about these images that were insensitive to the seriousness of what the images revealed. Soon thereafter, I removed those images and comments, again several years ago," Wolf said in a statement.

The story was first reported by the Topeka Capital-Journal, which obtained the images but did not show them to the public. Wolf argued he was legally allowed to post those images online because he was not revealing the patients' identities and he was doing so for educational purposes.

In his statement Sunday, Wolf put the blame on Roberts, accusing his "political adversary" for bringing the images to the public. But he went on to say that "my mistakes are my own, and I take full responsibility for them."

A source close to the Roberts campaign confirms to CNN that the campaign will spend six figures to run the ad on cable television in Kansas City, Wichita-Hutchinson and Topeka over the next 10 days.

A second cousin (once removed) of President Barack Obama, Wolf paints himself as a conservative activist with the guts to stand up to the GOP establishment. As a doctor, he frequently campaigns against the Affordable Care Act and proposes his own plan that he calls "PatientCare." A leading national tea party group, the Tea Party Express, is holding a rally for Wolf Thursday in Topeka.

Earlier this month Wolf went up with a radio spot, first reported by CNN, that questioned Roberts' ties to Kansas. The ad came after a report in the New York Times that even though the three-term senator owns a rental property in his hometown of Dodge City, he lists as his voting address the home of two longtime political supporters who rent out a room to the senator. Roberts also owns a home in the Washington D.C. suburbs, where he spends much of his time.

The Roberts campaign quickly pushed back against Milton and the New York Times story, taking issue with the suggestion that the senator does not have a "home" in Dodge City. The campaign said Roberts rents a room from his friends in Dodge City because he cannot stay at the property he rents out.

The new ad by Roberts was first reported by Politico.