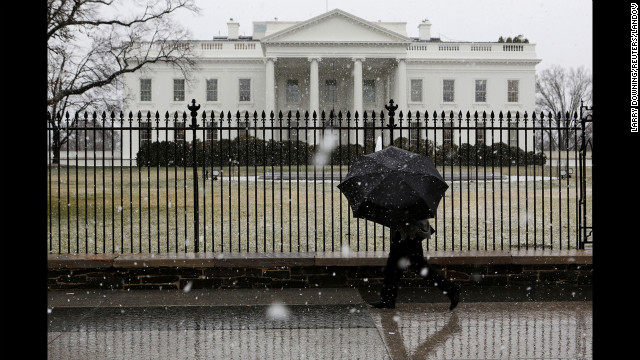 (CNN) - More Republicans say they wouldn't like Chris Christie to run for president in 2016 than those who say want the GOP governor from New Jersey to launch a White House bid, according to a new national poll.

And the survey, from CBS News and the New York Times, also indicates that while Democrats overwhelming say they want former Secretary of State Hillary Clinton to run again, they are divided on whether they'd like to see Vice President Joe Biden launch another presidential campaign.

[twitter-follow screen_name='politicalticker']
Eighty-two percent of Democrats questioned in the poll,  which was released Wednesday, say they'd like Clinton to run, with 13% disagreeing. By a 42%-39% margin they say they want Biden to launch what would be his third bid for the Democratic nomination. Both Clinton and Biden are mulling bids. If Clinton does run, the general consensus is that she would instantly become the overwhelming frontrunner for the party's nomination.

More than half say they didn't know enough about freshman Sen. Elizabeth Warren of Massachusetts and New York Gov. Andrew Cuomo to answer the question. Warren has said she won't run, and Cuomo has also downplayed any notions of running for the White House in 2016. Martin O'Malley appears to be seriously considering a bid, but according to the poll more than eight in ten Democrats don't know enough about the two-term Maryland governor to answer whether they'd like him to run for president.

The New Jersey governor should not run for the GOP nomination in 2016, say 41% of Republicans questioned in the poll, with 31% saying Christie should launch a bid. Federal and state investigators are looking into the role members of Christie's administration allegedly played in the lane closures that caused massive traffic jams at the Fort Lee, New Jersey entrance to the George Washington Bridge last September.

Christie has denied knowing anything about the gridlock until after it occurred, and has said he knew nothing about any political mischief by members of his administration. But the controversy, which made national headlines last month, has shaken the two-term governor's political future, and his approval ratings have taken a hit in national and Garden State surveys.

Christie appeared to react to the new poll at a town hall during a snowy Wednesday morning  in Long Hill, New Jersey, saying  "the only two professions in America where you keep getting paid even when you are always wrong affect my life everyday – pollsters and weathermen."

Just over four in ten Republicans say they'd like to see former two-term Florida Gov. Jeb Bush run for the GOP nomination, with 27% disagreeing. By a 39%-21% margin, they say they'd like to see Sen. Rand Paul of Kentucky run, and by a 32%-15% margin they say the same thing about Sen. Marco Rubio of Florida. Nearly six in ten Republicans say they don't know enough about Sen. Ted Cruz of Texas to answer the question.

Half of independents questioned in the survey say they'd like to see Clinton throw her hat into the presidential ring, "the highest percentage among both the Democratic and Republican figures asked about in the poll," says a release from CBS News. But 42% of independents don't want her to run. By a two-to-one margin they don't want the Vice President to launch another White House bid.

Independents are divided on whether Paul or Christie should run, with a plurality saying Bush should not launch a campaign. Independent voters, who are not aligned with either the Democratic or Republican parties, can vote in party primaries in some states.

The next race for the White House officially doesn't get underway until after November's midterm elections. It's fair to say that at this early period in a presidential election cycle, such surveys are often heavily influenced by name recognition.

The CBS News/New York Times poll was conducted Feb. 19-23, with 1,644 adults nationwide (including 519 Republicans, 515 Democrats and 610 independents) questioned by telephone. The survey's overall sampling error is plus or minus three percentage points, with a sampling error of plus or minus six percentage points for questions of only Democrats, Republicans, or independent voters.