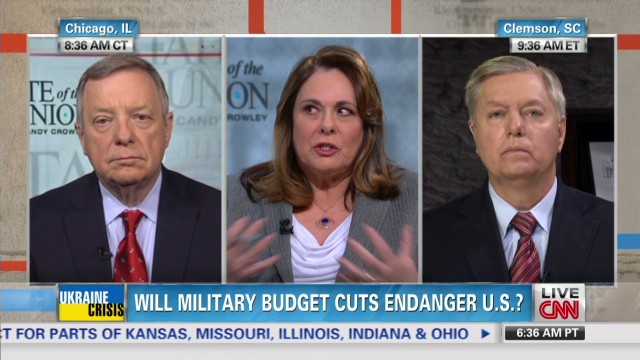 It’s also the latest foreign policy challenge facing President Barack Obama, whose tenure has been plagued by international crises ranging from two wars, an unruly North Korea and uprisings in the Middle East.

If you missed any of the Sunday chatter, we've got you covered:

The chairman of the House Intelligence Committee, Rep. Mike Rogers, was also frank about the President’s foreign policy performance.

“I think Putin is playing chess, and I think we're playing marbles,” Rogers, of Michigan, said on “Fox News Sunday.”

Noteworthy signs of support: While the Obama administration has been criticized for its handling of Putin, it received support from unlikely places.

On NBC’s “Meet the Press,” Republican Sen. Marco Rubio said he was “encouraged” by what Kerry has said about Putin, and Rep. Adam Kinzinger, an Illinois Republican and a member of the House Foreign Affairs Committee, said on “Fox News Sunday that Congress will “stand strong” with the President.

Now what?: Graham said the President should “do something” about Putin’s latest act of aggression. He suggested suspending Russian membership in the G8 and G20 economic groups “for at least a year.” Such a move would be symbolically significant because it would publicly marginalize Russia. It could also have direct economic consequences because Russia would be shut out from the economic cooperation the groups provide and possible growth.

“We’ve got to make it clear to Putin that he doesn’t have license to invade,” Graham said.

Democratic Sen. Richard Durbin of Illinois, one of Obama’s closest friends in the Senate, mostly agreed with Graham – except for his criticism of Obama.

Durbin said the Senate should pass a resolution condemning Putin and suggested limiting Putin’s international travel. He had harsh words about the Russian leader.
Putin has a “grandiose vision of empire” and is taking advantage of his neighbors who rely on Russia for oil and other natural resources while wanting to “play like he’s part of civilized society,” Durbin said. “We’ve got to make him feel that there’s a price to pay for this conduct.”

“We've got to make it clear to Putin that if there are Russian-speaking people on the soil of another nation, that doesn't give him license to invade,” Durbin said.

Ukrainian ambassador to the U.N., Yuriy Sergeyev, made a similar point on “State of the Union.”

“(I) couldn't imagine that Russians could protect any Russian-speaking (people) around the world, including here … in United States. In Brooklyn,” he said.

Kerry: Time for diplomacy: Secretary of State John Kerry made the rounds on the three broadcast networks, where he maintained a defensive posture that President Obama gave when he addressed the situation on Friday in a televised address.

Kerry said on ABC’s “This Week” that the United States and its allies are pressuring Putin to “roll back” the invasion in the Ukrainian Black Sea peninsula.

While he said “all options are on the table,” and that U.S. efforts are aimed at ensuring that Russia understands the seriousness of the situation, Kerry said “this is a time for diplomacy.”

We're going to continue to engage diplomatically. It's the time for diplomacy. Nobody wants this to spiral in a worse direction.

Kerry made this point in his three talk-show appearances. On NBC’s “Meet the Press,” he had the same message: “The last thing anybody wants is a military option in this kind of situation.”

He added, however, that if diplomacy doesn’t work, “there will be serious repercussions” that would isolate Russia.

But the big question is whether the United States will boycott the upcoming G8 meeting in Sochi this June. Kerry would not go that far but said on CBS News’ “Face the Nation” that the United States is “absolutely prepared” to boycott if other efforts fail.

Obama’s phone call: Kerry also went into additional detail about the 90-minute phone conversation between Obama and Putin Saturday in which Obama laid out a series of alternatives to invading Crimea.

There are many options available to #Russia. Pres. Putin needs to think about Russia's interests. There will be costs to military action.

President Obama made it clear we are prepared to work with #Russia to help people of #Ukraine. There are many alternatives to invasion.

But Rogers warned that Putin has demonstrated a pattern of aggressive maneuvers.

“This is not an isolated incident,” Rogers said, referring to moving Russia’s border deeper into Georgia in 2008, the agreement with Syria regarding its chemical weapons and its involvement in Iran.

“There is not a lot of options (sic) on the table,” Rogers said. “And candidly - and I'm a fairly hawkish guy - sending more naval forces to operate in the Black Sea is not a good idea. … Unless you're intending to use them, I wouldn't send them.”

A smaller defense: As the United States debates the next steps with Russia regarding Ukraine, Defense Secretary Chuck Hagel defended his call to reduce the Army to the smallest level since World War II.

“We have to reset, reposition,” Hagel said on “Face the Nation.”

“I’ve got to be able to keep a modern military,” he said, noting that while combat troops will be reduced, increases in cybersecurity and other areas are more relevant for the first budget in 12 years that doesn’t include costs for war.

But Graham said Hagel’s proposal does little to deter war, saying his budget “guts our defense.”

“If you’re going to modernize … this budget is not going to do it,” Graham said.

IRS scandal – it’s not over: In news closer to home, Republican Rep. Darrell Issa of California announced a development in his investigation of the Internal Revenue Service’s alleged targeting of conservative and liberal political groups seeking tax-exempt status.

Lois Lerner, the former director of tax exempt organizations for the IRS who invoked the Fifth Amendment during her previous testimony on Capitol Hill, will appear before Issa’s House Oversight Committee this week, he said on “Fox News Sunday.”

2016: And you can’t have a political show without the mention of the presidential race. On “Meet the Press,” Rubio, of Florida and a speculative candidate, said he will consider a presidential run “later this year.”

End note: As his country moves closer to military conflict, Sergeyev offered some poignant words for Putin: “We are on the eve of the great 40 days – orthodox lent starts tomorrow. If he is a Christian, if he demonstrates his Christianity, instead of preparing to kill us, he should pray for us.”

CNN's Dana Davidson and Greg Clary contributed to this report.