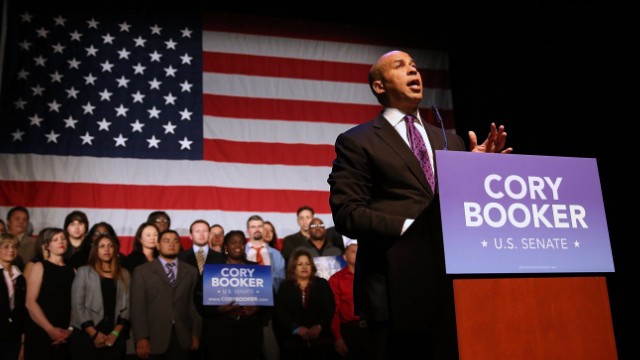 (CNN) - Even though Sen. Cory Booker has been in office for less than five months, a majority of New Jersey voters questioned in a new poll say the freshman Democratic lawmaker deserves a full six year term in the Senate.

According to a Monmouth University/Asbury Park Press survey released Monday, 55% of Garden State voters say the Democratic senator deserves to be re-elected this November, with one-third saying it's time to have someone else on Capitol Hill.

The two-term mayor of Newark, New Jersey easily won a special election last October to serve out the final 14 months of the term of the late longtime Democratic Sen. Frank Lautenberg, who died in office. Booker is running for a full term this November.

The poll indicates the expected partisan divide, with 82% of Democrats but only 18% of Republicans saying Booker deserves re-election. By a 50%-35% margin, independent voters say Booker deserves a return ticket to the Senate.

"New Jersey voters are just getting to know Cory Booker as their Senator and generally giving him positive reviews," said Patrick Murray, director of the Monmouth University Polling Institute.  "They feel they have seen enough to say he deserves a full term."

According to the survey, 47% of Garden State voters say they approve of the job Booker's doing in office, with 20% giving him a thumbs down and 32% unsure.

The Monmouth University/Asbury Park Press poll was conducted Feb. 19-23, with 690 registered voters in New Jersey questioned by telephone. The survey's overall sampling error is plus or minus 3.7 percentage points.