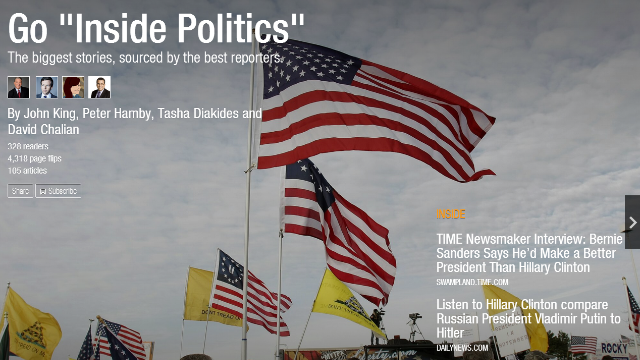 CNN's ‘Inside Politics’ is on Flipboard

(CNN) – Every story, every angle, every minute. Now, all of the leading political articles, videos and social media content that the best reporters in the business talk about on CNN’s newest show, “Inside Politics” can be found in one place - on the show’s Flipboard Magazine.

CNN's Chief National Correspondent John King, the host of the show, sat down with Flipboard to discuss the changing landscape of political coverage including new technologies, how he uses the infamous “Magic Wall,” and what it’s like covering political races from every state across the country.

[youtube http://www.youtube.com/watch?v=nCUQRuJ5m64&w=560&h=315%5D
“I call this the curiosity business and I’m insatiably curious about people– about places,” King says. "The thing that fascinates me about politics is … how did they get there? What were people mad about or excited about that made them organize?”

King, whose first job was as a paper boy for the Boston Herald, has now covered three administrations, seven presidential elections, and has moderated several presidential debates. As a young reporter for the Associated Press, he broke the news of then Governor Bill Clinton’s VP pick after receiving what now seems like a very low-tech clue on his pager -the number “4673.”

During election years, King provides the latest developments from the trail and across the network’s programs and platforms. Using the “Magic Wall,” he connects the dots in politics by illustrating how voting habits have changed across election cycles and analyzing voting behavior on key issues.

“One of the things that I found in my travels in 2008 was that people would thank me for coming to their community - on the “wall” - never mind my travels coming to the community,” said King.

“It’s easy for the glaze factor. You know, how many votes does somebody have, what county are we talking about. It’s just hard to follow. But if you can say, ‘Come with me. I’m going to show you. What are we waiting for? Why does Cuyahoga County matter? What is this little county in Indiana that is holding up the call between Clinton and Obama? Let’s go.’”

But it's hard to cover elections from Washington, so King has become a regular battleground state visitor.

King says that the events around him growing up influenced his interest in journalism and that his dad, a jail guard, always read three papers and watched the news.

The host of “Inside Politics” continues his dad’s tradition but points out the great gift of technology is that anyone can use it to follow what the top political reporters are reading, watching and flipping throughout the day.

View and subscribe to the "Inside Politics" Flipboard magazine. You can also subscribe to "The Lead with Jake Tapper" and "Fareed Zakaria: GPS" magazines on Flipboard.