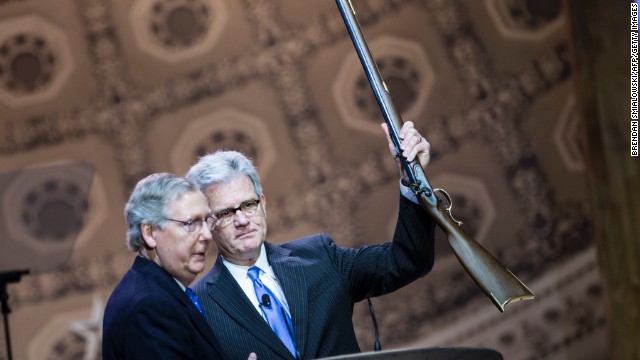 DEVELOPING …. PRESIDENT OBAMA SAYS REFERENDUM IN CRIMEA WOULD VIOLATE INTERNATIONAL LAW: “The proposed referendum on the future of Crimea would violate the Ukrainian constitution and violate international law. Any discussion about the future of Ukraine must include the legitimate government of Ukraine. In 2014 we are well beyond the days when borders can be redrawn over the heads over the heads of democratic leaders.”

MEANWHILE … REPUBLICANS RALLY, TESTING MESSAGES FOR 2014… On day one of the Conservative Political Action Conference (CPAC), GOP rising stars and presidential hopefuls took to the stage at a convention center at National Harbor, Maryland.

TED CRUZ KICKS IT OFF, BRINGS THE CROWD TO THEIR FEET: The freshman Republican from Texas called for the abolition of the IRS, urged the adoption of a fair tax, and said that "every single word of Obamacare" needs to be repealed.

CRUZ: "You want to lose elections, stand for nothing. Look at the last four congressional elections - 06, 08, 10, and 12. Three of the four we followed that strategy; 06, 08, 12 we put our head down, we stood for nothing and we got walloped. The one election that was a tremendous election was in 2010 when Republicans drew a line in the sand. We said we stand unequivocally against Obamacare, against bankrupting the country and we won an history tidal wave of an election," Cruz said.

CHRISTIE URGES POSITIVE MESSAGE: Receiving a warm reception from the audience, Christie said the GOP needs to change the way it shares its message with voters in order to defeat Democrats in this year’s midterms.

CHRISTIE: “We’ve got to start talking about what we’re for and not what we’re against. … We don't get to govern if we don't win...let's come out of this conference resolved to win elections again"

SEN. RUBIO QUESTIONS OBAMA, IGNORES IMMIGRATION: In a 16 and a half minute-long speech, Sen. Marco Rubio, R-Florida, touted a robust foreign policy agenda, bashing the president for his lack of leadership, and left out immigration policy altogether.

RUBIO: “I don't like to make these issues of national security partisan 'cause it's important that our country be united in moments like this. But we cannot ignore that the flawed foreign policy of the last few years have brought us to this stage, because we have a president who believed but by the sheer force of his personality, he would be able to shape global events. We have a president who believed that by going around the world and giving key speeches in key places, he could shape the behavior of other nations and other people.”

GOV. BOBBY JINDAL QUESTIONS OBAMA’S INTELLIGENCE: “We have long thought and said this President is a smart man. It may be time to revisit that assumption.”

THE BUZZ: CPAC BOOTH OFFERS REPUBLICANS CHANCE TO THROW THINGS AT DEMOCRATS - OR CHRIS CHRISTIE: CNN’s Sara Fischer and Dan Merica report: Filling the basement of convention center in National Harbor, where CPAC is underway, are dozens of booths, set up to hand out flyers, candy and other knick-knacks to woo conference attendees. One booth, however, is not handing out goodies. Instead, they’re offering stress relief in the form of brick-shaped sponges that passer-byers can use to whack cut-out pictures of politicians’ faces.

While the official count is still being tabulated, Voter Brick tells CNN that Hillary Clinton and Sec. of State John Kerry so far have the most votes. Christie, despite having spoken at the conference, also has “a few.”

TRAIL TRIVIA
(Answer below)
Who has won the most number of CPAC straw polls?

Leading CNNPolitics.com: House approves aid for Ukraine
The House of Representatives Thursday overwhelmingly approved a financial aid package for Ukraine, authorizing up to $1 billion in loan guarantees. The vote was 385 to 23.

Leading Drudge: Christie Standing O At CPAC
The crowd gathered at the Conservative Political Action Conference rose to its feet as Chris Christie exited stage left. The New Jersey governor, who has been dogged by a scandal stemming from revelations that members of his administration conspired to shut down traffic lanes leading on to the George Washington Bridge, came to CPAC on Thursday in need of a reception like that, and the party faithful delivered. – Eliana Johnson

Leading Politico: Harry Reid has no apologies
Republicans think Harry Reid is running the Senate like a dictator: His no-compromise style is almost like Vladimir Putin’s, and his inflammatory rhetoric is reminiscent of the Joe McCarthy era. But Reid doesn’t seem to care. “Get a brain, OK?” the Senate majority leader snapped at a reporter, when asked why he doesn’t permit far more votes on GOP amendments. “You’re a smart guy.” – Manu Raju and Burgess Everett

Leading HuffPo: John Boehner Defends Darrell Issa Over Heated IRS Hearing
House Speaker John Boehner (R-Ohio) stood by Rep. Darrell Issa (R-Calif.) Thursday amid Democratic calls to remove Issa from his post as chair of the House Oversight Committee over a contentious hearing on the Internal Revenue Service. "From what I understand, I think Mr. Issa was within his rights to adjourn the hearing when he did," Boehner told reporters at his weekly press conference. "The issue here is our effort to try to get the truth of the abuse by the IRS of groups around the country that some in the administration don't agree with." – Sabrina Siddiqui

- Pelosi: He says that because he’s under pressure -
HOUSE MINORITY LEADER NANCY PELOSI AT A GOP WEEKLY PRESSER: “With all the respect in the world for the Speaker in terms - I think that he is a courteous gentleman, he must be under a lot of pressure if he thinks what Darrell Issa did was OK.”

Leading New York Times: New Democratic Strategy Goes After Koch Brothers
On Thursday, the Democratic Senatorial Campaign Committee is starting a digital campaign that will use Internet ads and videos, as well as social media, to tie Republican Senate candidates to the policies and actions of the Koch brothers. Its slogan: “The G.O.P. is addicted to Koch” (pronounced coke). – Ashley Parker

- Issa: I don’t know what to believe anymore -
RANKING MEMBER OF THE HOUSE OVERSIGHT COMMITTEE REP. ELIJAH CUMMINGS, D-MARYLAND, AT A PRESSER: “Honestly, I can't keep up with all of Chairman Issa's Pinocchios.”

- Graham explains Benghazi-Ukraine tweet -
SEN. LINDSEY GRAHAM IN AN INTERVIEW WITH CNN’S DANA BASH: "The point I'm trying to make is that there's been too many times in the last six months where the President has told people, 'if you don't do what I say, there'll be consequences,' and nothing's happened."

- Reid: I am bad bait -
SENATE MAJORITY LEADER HARRY REID IN AN INTERVIEW WITH POLITICO EXPLAINING WHY REPUBLICANS CAN USE HIS LEADERSHIP AS AN ISSUE IN MIDTERM ELECTIONS: “Most people don’t know who I am.”

- Bernie Sanders: ‘I am prepared to run’ for President -
SEN. BERNIE SANDERS, I-VERMONT, IN AN INTERVIEW WITH THE NATIONAL REVIEW: “I don't believe that I am the only person out there who can fight this fight, but I am certainly prepared to look seriously at that race … If the question is, am I actively right now organizing and raising money and so forth for a campaign for president, I am not doing that. On the other hand, am I talking to people around the country? Yes, I am.”

- War or not war? That is the question –
DEP. ASST. SECRETARY FOR EUROPEAN AND EURASIAN AFFAIRS ERIC RUBIN AT THE HOUSE FOREIGN AFFAIRS COMMITTEE HEARING: “We have said very clearly that we know what we have seen which is military aggression, intervention in the affairs of a sovereign country, violation of legal commits, violation of international law. That is what we see. That is what we are calling it.”

CHAIRMAN OF THE HOUSE COMMITTEE ON HOMELAND SECURITY REP. MIKE MCCAUL, R-TEXAS: “I do think we should call it what it is. You said it is very clear it’s a violation of international law. I believe this is also very clear that this is an act of war against another nation.”

PRESIDENT OBAMA IN A PRESS CONFERENCE: “Since the Russian intervention, we have been mobilizing the international community to condemn this violation of international law and to support the government and people of Ukraine.”

- The Denny’s Grand Slam -
SENATE MINORITY LEADER MITCH MCCONNELL, R-KENTUCKY, AT CPAC: “The president of the United States is treating our constitution worse than a placemat at Denny's. I've spent so much time over in the Supreme Court trying to stop these guys, I'm practically on a first name basis with the bailiff. Obamacare, the EPA, the unconstitutional recess appointments, it never stops. It's just about power for these people.”

TOP TWEETS
What stopped us in 140 characters or less
Allison L. Grimes (@AlisonForKY)
Someone tell @Team_Mitch that's not the way to hold a gun. KY women do it better. #kysen

McKay Coppins (‏@mckaycoppins)
Paul Ryan: "Right now, the tax code is 10 times the size of the Bible, and has none of the good news."

Shane Goldmacher ‏(@ShaneGoldmacher)
What a split screen: McConnell on stage at #CPAC2014 with a gun while Dalai Lama opens Senate session at the Capitol

Philip Klein (@philipaklein)
Jindal now moves into describing his education reforms, which he seems more suited for than the red meat stuff.

Mo Elleithee (‏@MoElleithee)
If you want to support @TheDemocrats this election year, help me make the truth go viral by becoming a #Factivist: http://factivists.democrats.org

Laura Bassett (‏@LEBassett)
Harry Reid and Mitch McConnell both voted for Gillibrand's military sexual assault proposal, but it failed to make it to 60

Mitt Romney has won the most CPAC straw polls in the history of the conference: four. President Ronald Reagan and Rep. Jack Kemp follow behind with three consecutive wins each, and Rep. Ron Paul won two.

The ballot for this year’s straw poll was released today. It does not include Former Governor of Florida Jeb Bush. See below.

Thinking ahead to the 2016 Presidential election, who would you vote for as the next Republican nominee for President?