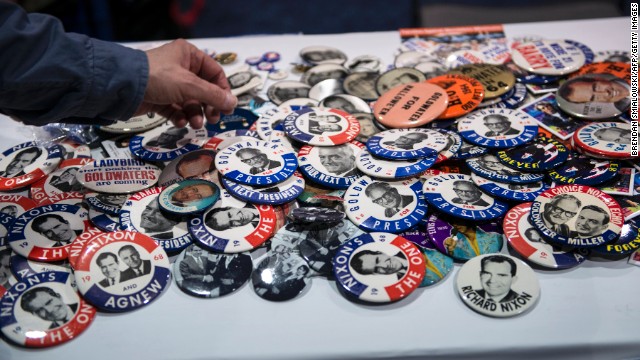 It's a conference where thousands of young Republicans from colleges across the country come to network and possibly meet Mr. or Ms. Right. It's a marketing bonanza for authors and organizations. It's a place to wear your favorite American flag underwear. This is CPAC - CPAC beyond the headline-making political speeches.

At the Gaylord Hotel on the banks of the Potomac - which bills itself as being in Washington but is actually about 10 miles south - the excitement on this Thursday morning is palpable as the line to register or check in winds around several corners. Rep. Paul Ryan, the 2012 vice presidential candidate is one of the first to speak and conference-goers are anxious to get in before he starts.

Meanwhile, 20-year-old University of Arizona student Stephanie Salazar is "totally starstruck." She saw Texas Sen. Ted Cruz. This Texas native was so excited she pulled out her phone and took pictures. But, it was Salazar's lucky day. Cruz came over to shake her hand. "Oh my God.

Ted Cruz is supposedly in the middle of that mob:

So then she got her picture taken with him! The first person she's going to call and tell is her dad. Cruz definitely made this first-time CPACer's day.

This is CPAC. Where young conservatives get to meet the people they admire.

So I got to talking to Salazar and her two friends, Michael Price and Caleb Rhodes, also students at U of A, who all praised Arizona Gov. Jan Brewer for vetoing SB 1062, the "religious freedom" bill that would allow businesses to discriminate against gay people.

"We as [the college Republican] club protested the bill because we didn't support it," Rhodes said.

"A lot of younger individuals are ready to to get back to the idea of individual freedoms," Salazar added as her two friends nodded in agreement.

This is CPAC. Where the younger generation of conservatives invoke their ideas.

CPAC is also home to a wide swath of conservatives, including the Tradition, Family and Property organization, which was part of the movement to ensure GOProud, a Republican gay organization, is not a co-sponsor of CPAC.

A little background: GOProud was a co-sponsor in 2011 but instead of boycotting like some social conservative organizations, TFP attended CPAC and handed out more than 4,000 flyers opposing GOProud's participation. They lobbied the leadership of the American Conservative Union, the organization that sponsors CPAC, to not allow them back. It worked.

And they are still at it, making sure GOProud continues to be excluded by hounding these flyers:

But young people are numerous at CPAC. And many don't agree with TFP.

Two college freshmen from Wellesley College said the Republican Party needs to focus on fiscal issues and get out of the bedroom.

But waaaay more interesting is that these two young conservatives go to Wellsley! Yes, that's the small liberal arts school in Massachusetts that is also Hillary Clinton's alma mater. And they chose to go there.

Anna Page, left, and Liza Arias admit they are a minority on campus and only have about 20 active members in their College Republicans chapter. But, they say, they're proud of their conservatism, have had to study harder to make sure they aren't out-debated by their liberal classmates and have become more conservative since they went off to college six months ago.

As for being at CPAC, "It's great to be around like-minded people." A new experience for them.

There's not really much to say about that. The picture speaks for itself.

CPAC is also about future politicians - including the possible future mayor of North Myrtle Beach.

Once Christian Hamilton is done at Liberty University, the conservative school in central Virginia founded by Moral Majority founder Jerry Fallwell, he's going to grad school then moving home to run for MAYOR.

This North Myrtle Beach, South Carolina, native says his young age won't be a factor because he "knows people." He promises to increase paltry voter turnout to pull out a "W" and bring more growth to the Grand Strand.

As for CPAC, Hamilton loves it. He's been for three years and says he goes to sleep late and gets up early.

Let's face it, people like a good party. Hundreds of young people with similar beliefs in the same place. Good times.

Then there's David Silverman. He's standing right outside the doors to get into the main speakers' room wearing an atheists t-shirt.

He requested to host a booth, which was approved. But after CNN published an article with Silberman saying he wants to split conservatives from Christianity, his booth was revoked.

And he's actually having a good time.

Darth Vader and crew are at CPAC to help author Travis H. Brown sell his book about income tax. "Star Wars" and income taxes. Got it.