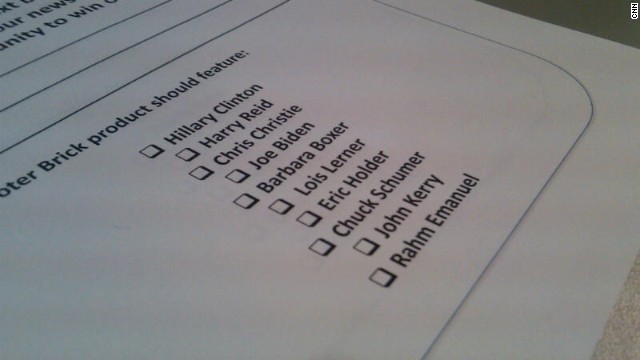 CPAC stress relief: Whack a politician's face with a sponge

National Harbor, Maryland (CNN) - Filling the basement of a convention center in National Harbor, where Conservative Political Action Conference (CPAC) is underway, are dozens of booths, set up to hand out fliers, candy and other knick-knacks to woo conference attendees. One booth, however, is not handing out goodies.

Instead, it's offering stress relief in the form of brick-shaped sponges that people can use to whack pictures of politicians.

The group, called Voter Brick, is a relatively new advocacy organization that's come to CPAC to deliver a simple bipartisan message: "Don't take it all so seriously." The booth's organizer, Rainer Fehrenbacher, says the group set up the booth at CPAC this year to provide political junkies in attendance with an opportunity to "let loose."

While the group prints pictures of both Democratic and Republican politicians, the only Republican picture sold at this year's CPAC is New Jersey Gov. Chris Christie, who was invted to speak at the conference this year after having been snubbed in years past. The group is also selling pictures of President Barack Obama and House Minority Leader Nancy Pelosi.

Voter Brick is also asking conference-goers to vote for the politician they hate the most and they think deserves to have their picture printed to be sponge-slapped next. While the official count is still being tabulated, Fehrenbacher tells CNN that Hillary Clinton and Secretary of State John Kerry so far have the most votes. Christie, he says, also has a few.

Fehrenbacher, who back moved to Phoenix after losing his job at a college in New York, said he joined Voter Brick because he didn't want to collect unemployment. Through Voter Brick, he offers a service where politicians can order pictures of opponents' faces to slap with sponges. So far, he has yet to sell any pictures, he says, because the campaign-specific sales are still in testing.