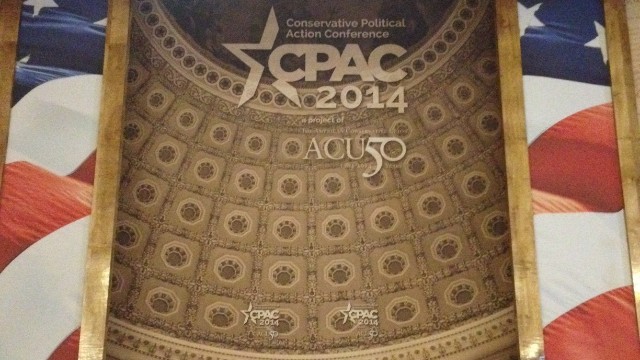 (CNN) - The third and final day of the Conservative Political Action Conference – better known by its initials, CPAC – is underway at a major convention center at National Harbor, just south of the nation's capital.

The conference is the largest annual gathering of conservative leaders and activists, and when there's no Republican in the White House, it's a must-attend cattle call for Republican presidential hopefuls looking to pass the conference's conservative litmus test. CPAC will close Saturday with the much-anticipated results of the confab's GOP presidential nomination straw poll.

The former Republican vice presidential candidate and tea party favorite closed out the Conservative Political Action Conference as the final keynote speaker, energizing a big crowd to the point where it erupted into chants of "Run, Sarah Run!"

In a rabble-rousing speech on Saturday outside Washington, Palin hit the right-wing high notes - from the Benghazi terror attack and IRS targeting to the "War on Women" and political correctness.

She even took out a couple of copies of "Green Eggs and Ham" to honor another tea party darling, Sen. Ted Cruz, a Texas Republican who read from the Dr. Seuss classic during a filibuster over Obamacare and spending last fall.

But her version had a political spin on it.

The big crowd, hanging on her every word, eventually erupted into chants of "Run, Sarah, Run!"

"I should. I didn't get to run this morning. I was so busy, man," she said to big laughs.

Palin has not said whether she will run for office again. In 2009, she resigned as Alaska's governor a year and a half early in her first term.

She went on to offer high praise for some fellow Republicans, like Cruz, who finished a distant second to fellow senator and potential White House hopeful, Rand Paul, in this year's CPAC presidential straw poll.

"Liberty needs a Congress on Cruz control," she said.

"Ted Cruz and Mike Lee and Paul and Gowdy and Gosar and Gohmert– we've got some good guys in there!" she said, although she did not offer an endorsement of any of the party's possible 2016 contenders.

About half of CPAC attendees said they disliked Republicans in Congress, according to the conference's straw poll - and Palin took up that mantle, criticizing "the GOP establishment" who, she said, want Republicans to "lay low" and watch the Democrats self-destruct.

"You do interrupt when they are in the process of destroying your country, and that's what we're gonna do in 2014," she argued.

But her biggest target, as always, was President Barack Obama, arguing he has broken his promises and taken the country in the wrong direction. Luckily, she said, he's almost out.

"The age of Obama is almost over - the end of an era. He is the lamest of lame ducks," she said.

Gingrich pans Obama, cautions GOP to not be the 'anti' party

President Barack Obama took some flak for traveling to Florida for a getaway with his family amid the crisis in Ukraine. But Newt Gingrich jokingly told conservatives on Saturday not to worry: Obama can be ineffective no matter where he is.

"The President spent all of last week proving he was capable of being ineffective. I believe he can be as ineffective in Key Largo as he was in the White House," he said to laughter and big applause at the Conservative Political Action Conference just outside Washington in Maryland.

The co-host of CNN's "Crossfire" and former House speaker spoke about innovation and politics, advocating a "big rebellion" on the "battlefield of ideas."

In a speech that ranged from Alexander Graham Bell to the smart phone, Gingrich argued that the GOP must become the party of the future instead of the party of opposition.

"We must stop being the opposition movement, and we must become the alternative government movement that will help make the life of every American better so that they understand what we would do that would be right, not just what the left is doing that is wrong," he said.

A big part of that is moving past criticizing Obama and introducing new ideas, he argued.

"If our movement is primarily anti-Obama, we will in fact reduce the number of victories we should win this fall. If we spend the next three years being anti-Hillary, we will virtually guarantee her election," he said.

The former secretary of state is the current front-runner for the Democratic nomination, according to polls, although she has yet to say whether she'll run for the White House.

Still, Gingrich, who mounted a Republican presidential campaign in 2012, went after Clinton, openly trying to paint her as part of the old guard who block a better future for average Americans.

"What I'm trying to do is set up a conversation in America among everybody on our side so that by 2016, Hillary Clinton is the leading prison guard of the past, propping up every failed bureaucratic institution in America," he said.

America will eventually have a female President, but Hillary Clinton is not the woman for the job, says a vocal conservative member of Congress and former White House hopeful.

Rep. Michele Bachmann, a Minnesota Republican who has been on the attack against the the former secretary of state and potential 2016 White House contender, sought to energize the faithful at the Conservative Political Action Conference on Saturday in Washington.

Bachmann, a former presidential candidate last time around, highlighted what conservatives contend was Clinton's failed policy "reset" with Russia and their criticism of the Obama administration around the deadly 2012 terror attack in Benghazi, Libya.

"We will have a woman for President - just the right one," she added in a comment similar to one made by Clinton earlier in the week about future prospects for a female chief executive.

Clinton, also a former first lady and U.S. senator, is the frontrunner in polls for the Democratic nomination, but she has not indicated whether she'll mount another presidential run following her unsuccessful candidacy in 2008.

Bachmann, who is leaving Congress, went on to remind the crowd that she was once the frontrunner for their party's nomination in 2012 and that their party is the only one to have had a woman on the presidential ticket "this century." Sarah Palin was John McCain's running mate in 2008.

Bachmann then launched into a red meat attack on President Barack Obama, questioning his trustworthiness and highlighting "Obamacare devastation."

Bachmann also urged conservatives to not give in on immigration reform, which they have balked at even though many political experts say overhauling the U.S. immigration system would be one way for Republicans to make gains with the important Hispanic voting bloc.

"That is the last thing that conservatives should do - is to help the President pass his Number One goal of his second term, and that's amnesty," she said, referring to proposals that would create a pathway to legal status for millions of undocumented workers in the United States.

Instead, she said the GOP needs to, "Keep our eyes on the prize" - the 2014 midterm elections when Republicans hope to retake control of the Senate.

"Taking the gavel out of (Senate Majority Leader) Harry Reid's hand on the first Tuesday of November is going to feel pretty darn sweet," she said. "His reign is over."

The results of the CPAC straw poll are analyzed and scrutinized on TV and online. But the idea that the results are any kind of barometer of what will actually happen two years from now in the 2016 GOP primaries and caucuses is extremely debatable.

Then-Sen. George Allen of Virginia won the the 2006 CPAC straw poll. At the time he was considered a potential leading contender for the 2008 GOP presidential nomination. But thanks in part to the "macaca" moment, Allen lost his 2006 Senate re-election, and with it lost any hope of running for the White House.

Then-Rep. Ron Paul of Texas won the straw poll in 2010 and 2011, in between his two bids for the GOP nomination. His victories were proof of the strong libertarian influence on the CPAC straw poll. But regardless of his CPAC victories, Paul never had a realistic chance of wining the nomination, and finished far behind eventual nominee Mitt Romney.

But the straw poll is useful.

"The straw poll is still more of a scrimmage of expectations. Beat the expectations, and you can generate a lot of buzz among the media and activists," said Kevin Madden, a Republican strategist, CNN contributor and senior adviser to Romney in the former Massachusetts governor's 2008 and 2012 presidential campaigns.

In 2007, Romney, considered in tune with conservative activists at the time, made winning at CPAC a priority. And he met expectations with a straw poll victory. He won again in 2008, narrowly edging out eventual GOP presidential nominee Sen. John McCain of Arizona, who was not a favorite of the conservative base. Romney won even though he ended his bid for the Republican nomination on the first day of the conference.

Romney won in 2012, as he was battling two more conservative candidates: Former Sen. Rick Santorum and former House Speaker Newt Gingrich. Romney's 2012 appearance is less remembered for his straw poll victory than for his description of himself as "severely conservative" in his speech to the audience.

Last year's contest ended up being a two-person race, with Sen. Rand Paul of Kentucky winning the straw poll with 25% of the vote, one percentage point ahead of Sen. Marco Rubio of Florida. The 21 other people on the ballot were far behind, registering in single digits.

After his very well received speech Friday afternoon, Paul is considered to be in a good position to win the straw poll for a second straight year.

This year, 25 names are on the straw poll ballot.