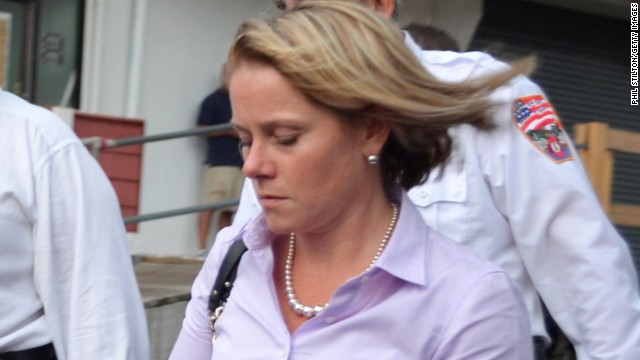 Trenton, New Jersey (CNN) - A former top aide to Chris Christie was in court on Tuesday to fight a subpoena from a state legislative committee investigating a political scandal roiling the New Jersey governor's administration.

It was Bridget Anne Kelly's first public appearance since losing her job in January over suggestions top Christie appointees orchestrated traffic jams near the George Washington Bridge in Fort Lee last year to punish that town's mayor for not backing their boss for reelection.

Kelly, 42, dressed in a black blazer and pearl necklace, listened closely while seated at her attorney's table during a hearing at Mercer County Superior Court in Trenton.

She did not speak during the proceeding that lasted more than three hours nor did she comment to reporters later.

Kelly, a former Christie deputy chief of staff, and the governor's former campaign manager, Bill Stepien, are fighting the request from a special legislative panel to turn over texts, emails and other documents related to its investigation of the traffic controversy.

The scandal has called into question Christie's forceful governing style and clouded prospects for a potential Republican presidential candidacy in 2016.

Lawyers for Kelly and Stepien argued their clients' innocence and contended that turning over documents would infringe on their constitutional rights to remain silent, which they previously invoked.

Neither has been charged with any wrongdoing.

The requests for information is limited to traffic jams last September caused by the closure of two bridge access lanes in Fort Lee, he said.

Assemblyman John Wisniewski, the co-chair of the investigative panel, said it had recently received other documents that lead the committee to believe Kelly and Stepien have important information.

"We've been receiving documents which have included emails from other people and some of those intersect with some of the material we already have as well as provide additional material," said Wisniewski. "So it's safe to say that there are additional emails that have Bridget Kelly's name on it. But I'm not going to get into the quantity."

He also did not provide any details about what those emails said.

Jacobson gave lawyers more time to file briefs in the case and was not expected to rule until month's end.

Kelly was thrust into the spotlight in January when texts that she exchanged with a top Christie appointee at the Port Authority of New York and New Jersey, which operates the nation's busiest bridge, raised the issue of traffic jams weeks before they occurred.

The U.S. Attorney's office is also investigating the matter.