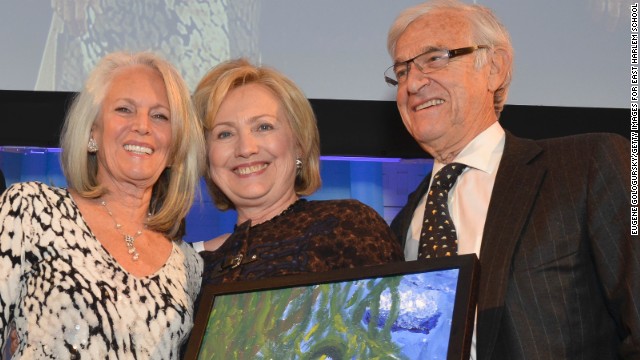 Hillary Clinton donor back in the fundraising mix

(CNN) - After Hillary Clinton lost the 2008 primary to President Barack Obama, Alan Patricof, a wealthy financier who had helped raise sizable donations to the Clinton campaign, took a step back from politics.

That all changes Tuesday night, when the owner of Apax Partners hosts President Barack Obama for a high-dollar fundraiser aimed at filling the campaign coffers of the Democratic National Committee and helping the Democratic body retire some of its campaign debt.

In an invitation for the fundraiser, which was first reported by Politico, Patricof described the event as a "fireside chat" that will both help the DNC and any future campaign by Hillary Clinton.

"We have recently decided that the most effective way that we all can be helpful to Hillary, and the Democratic Party in general, is to make sure that the Democratic National Committee is as strong as possible if Hillary should decide to run in 2016 and, for that matter if any other good candidate appears on the scene if she decides not to be in the race," Patricof wrote in a letter dated February 20.

The financier added, "With that background in mind, Susan and I have decided to extend our support to the DNC this year and to be helpful as we prepare for the upcoming campaign as it evolves."

Attendees to the Tuesday night fundraiser paid the maximum allowable campaign donation for an individual under current campaign laws: $32,400 per person.

Unlike the Republican National Committee, which has no debt, the DNC owes more than $15 million from the 2012 cycle.

Patricof has been a longtime supporter of Clinton. In 2008, he was part of a loyal group of fundraisers – called the "Hillraisers" – who donated and bundled millions of dollars for the then-senator's White House bid.

When asked by CNN earlier this year if he would look to bundle and fundraise for Clinton in 2016 – should she run – he said, "Yes, I can say that with certainty."

"I remain a Clinton supporter," Patricof said. "I definitely am very supportive of Hillary should she decide to go forward."

In the invitation to the Obama fundraiser, Patricof acknowledged his "various efforts to convince Hillary to run in 2016 and to demonstrate financial, as well as moral support, if she decides to go forward."

Clinton, the former secretary of state and first lady, is considering a bid for the presidency in 2016. She would be the likely frontrunner for the Democratic nomination as poll after poll shows she tops all other possible Democratic challengers.