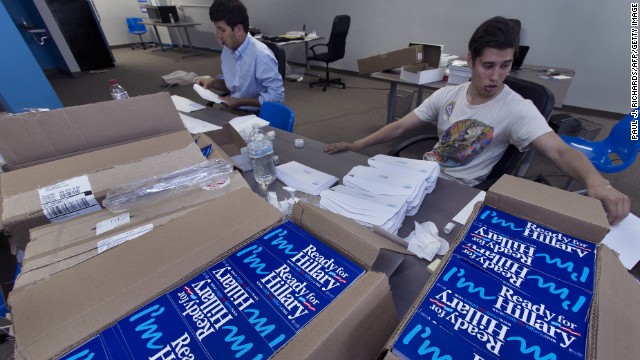 [twitter-follow screen_name='politicalticker']
The group, whose goal is to lay the groundwork for a Clinton campaign in 2016, currently boasts about 2 million supporters – but a Ready for Hillary source hopes that number will swell to roughly 5 million by the end of year.

The early collating and cataloguing of a base of supporters, largely through e-mail, comes after then-Sen. Barack Obama trounced the Clinton campaign’s social media efforts in the race for the 2008 Democratic presidential nomination.

Ready for Hillary is also raising money for the campaign they hope to see.

They are bracing for an expensive campaign cycle, should Clinton choose to run. Craig Smith, a senior adviser for Ready for Hillary, has made an “educated estimate” that a 2016 campaign could cost $1.7 billion including spending by outside groups, the source confirmed.

The numbers were first reported by Time Magazine's Mark Halperin.

Stuart Rothenberg, the editor of the the non-partisan Rothenberg Political Report, said Smith's fundraising figure is both part real and part motivation.

During the 2012 election, Democrats – including outside groups and the Obama campaign – spent around $1.1 billion dollars to win reelection for Obama. Rothenberg said because of the 2012 spending, "you have to assume every campaign can spend at least 1.1 billion, they know how to do it."

"But for most Americans, anytime we get a figure that has a B in it, people's eyes glaze over and they just start shaking their heads," Rothenberg added.

Clinton has said she would make a decision about running for the White House by the end of the year.