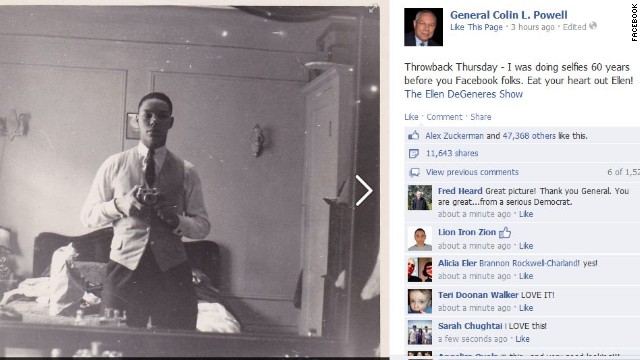 Colin Powell is starting his own selfie sensation.

The former secretary of state posted a photo on Facebook for what's become a social media tradition known as "Throwback Thursday," where people post photos from their past.

The retired four star general uploaded a black-and-white photo of a young Powell taking a picture of himself in front of a mirror.

"I was doing selfies 60 years before you Facebook folks. Eat your heart out Ellen!" he wrote in the caption.

Ellen DeGeneres blew up Twitter earlier this month when the 2014 Oscars host squeezed in a number of A-list celebrities for an epic selfie at the Academy Awards.

If only Bradley's arm was longer. Best photo ever. #oscars pic.twitter.com/C9U5NOtGap

It was re-tweeted more than 3.3 million times.