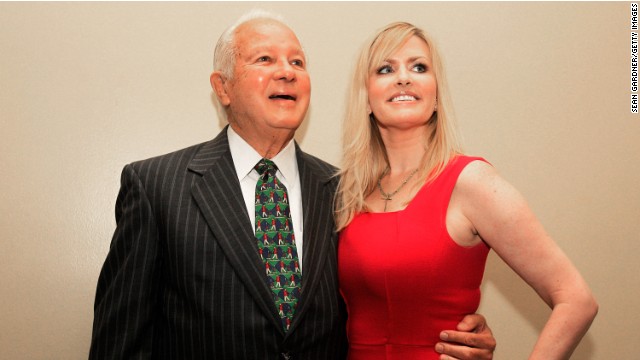 Edwards, who was released from federal prison three years ago after serving nearly a decade on charges of racketeering, conspiracy and extortion, made the announcement at a Press Club meeting in Baton Rouge.

The 86 year-old Democrat began serving his sentence in February 2001 for the charges stemming from a casino license scheme.

Edwards has stoked speculation recently that he had plans to launch a bid for the open seat, telling Bloomberg in February, "I'm just figuring out all the legalities and how to set up a super PAC, and then I'm going."

Edwards served two consecutive terms as governor from 1972 to 1980. He was elected to a third term in 1983 and a final term in 1991. The former U.S. Navy aviation cadet and lawyer began his career as a city councilman and state representative before being elected to Congress, and then governor.

Edwards married his third wife, Trina, who is 51 years his junior, shortly after leaving federal prison in 2011. They starred in a short-lived reality TV show "The Governor's Wife" on A&E, chronicling Edwards' post-prison life.

The Republican Party of Louisiana pounced on Edwards' announcement, saying the former governor's tenure brought the state "higher taxes, increased gambling and a culture of corruption that has harmed our image and business climate for decades."

"After failing to recruit credible candidates for multiple election cycles, the Louisiana Democrat Party finally landed a notable candidate for public office. Unfortunately, Edwin Edwards is known for all the wrong reasons. His antics may be fit for a reality show, but not public office," the group said in a statement after the announcement.