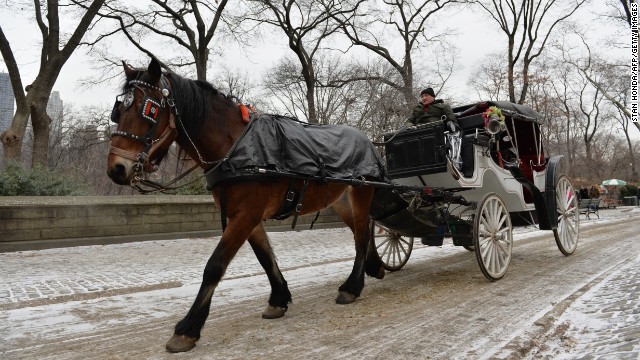 According to the survey, 64% of New York City voters say that de Blasio shouldn't ban the horse-drawn carriages, a longtime popular attraction with tourists visiting the city, with just under a quarter questioned in favor of the move.

At the end of last year, soon after he was elected in a landslide victory and just before he was inaugurated as mayor, de Blasio announced plans to immediately outlaw the carriages once in office.

"We are going to get rid of horse carriages, period," de Blasio said at a news conference, saying that the practice is inhumane.

De Blasio said he favored replacing the carriages with electric antique cars driven by the same carriage drivers, which he said would be more humane and still be appealing to tourists.

But the mayor's push to ban the carriages has stalled for now, with the City Council not yet acting on the proposal, and celebrities taking sides. The latest to weigh in: longtime animal rights activist Pink supports de Blasio's move, with actor Liam Neeson opposed.

How to pay for pre-K

Eighty-six percent of New York City voters support government funded universal pre-K, another issue that the mayor's pushing. But by a 54%-35% margin, the poll indicates they back New York State Gov. Andrew Cuomo's plan to pay for universal pre-K using existing state funds rather than de Blasio's proposal to pay for pre-K with a city income tax hike on families making more than $500,000 per year.

De Blasio, the first Democrat in two decades to serve as New York mayor, has a 45%-34% approval/disapproval rating in the Quinnipiac poll. That's down from a 53%-13% rating in mid-January Quinnipiac survey.

The Quinnipiac University poll was conducted March 12-17, with 1,234 New York City voters questioned by telephone. The survey's overall sampling error is plus or minus 2.8 percentage points.