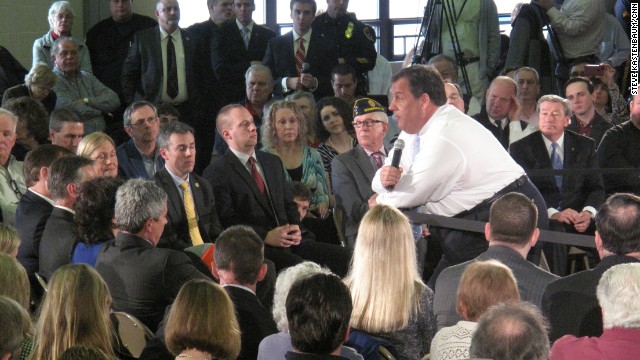 Flemington, New Jersey (CNN) – New Jersey Gov. Chris Christie was asked Thursday about the George Washington Bridge scandal for the first time at a town hall since the controversy that's roiling his administration made national headlines in January.

The Republican governor also got into a heated debate with a resident about his marijuana policy, and was later asked about the missing Malaysia Airlines jetliner.

Unlike his last two town halls, there were no vocal protests at the event in Flemington. However, a group of 10 demonstrators wearing white t-shirts that collectively spelled the word "Bridgegate" stood up frequently and raised their hands in hopes of being called on.

Frank Kanter of Mountain Lakes, New Jersey, started off his question in a friendly tone, proposing that he and his friends take care of Christie's dry cleaning if the governor lets them hang out at his house, "down a few beers, watch TV, (and) play pool."

Jokingly firing back, Christie asked: "You want to get married?"

As the audience laughed, Kanter stayed silent. "I think that's a no," Christie said, judging from Kanter's reaction.

Keeping a cordial tone, Kanter transitioned into a question about the bridge scandal. He argued that Christie fired his former deputy chief of staff, Bridget Kelly, for the wrong reasons.

At a January 9 press conference, Christie announced that he had fired Kelly after finding out through the media that she had lied about her involvement in an alleged orchestrated plot to close off access lanes to the George Washington Bridge.

During the press conference, Christie said he "terminated her employment because she lied to me."

Christie responded saying there were "lots of reasons for the firing," but added people shouldn't interpret that she was only fired because she lied.

The governor cut his ties with Kelly, as well as another top adviser, Bill Stepien, after documents were released showing the two had coordinated with David Wildstein, a political appointee at the Port Authority of New York and New Jersey, to arrange the lane closures for four days. Wildstein resigned before the controversy exploded onto the national landscape with the release of the documents.

A state legislative committee and the U.S. Attorney's Office in New Jersey have been investigating the incident, including allegations that the lanes were closed as an act of political retribution against the Democratic mayor of Fort Lee-which sits at the foot of the bridge-for not endorsing Christie's re-election bid last year.

Christie has maintained that he knew nothing of the lane closures before they occurred and found out about the traffic problems through media reports. He also says he didn't know his advisers' were involved until January, shortly before he held the nearly two hour press conference.

"Inherent to what I was saying was that I disapproved of the act also. And I did. And do," he said Thursday. "If she had told me the truth, she would have got fired, too, because of what she did. But I never had the chance to hear the truth."

"When you can't count on people to tell you the truth in an enterprise this size, you're sunk," he added. "That's why I made the emphasis on that, but please don't take from it that I thought the underlying conduct was somehow OK, because it was not."

He repeatedly said Thursday that their actions were wrong and he doesn't approve of what happened. He didn't go into whether it was illegal or not, pointing to the pending investigations.

Kanter, the man who asked the question, later told CNN he felt like Christie "danced around it a lot."

Another woman at the event said she feels "very sorry" for Christie, adding that "people are getting the impression that you're guilty before you're proven innocent."

"When you're in public life, you have to come to grips with the fact that you aren't always treated fairly," he responded, but urged her not to feel sorry for him.

"I can't sit around and get into a pity party for myself. Just can't. I have a job to do," he said.

Marijuana and the airline mystery

One woman confronted Christie about his position on marijuana, saying she doesn't understand his "rational on the issue" and pointed to a friend who she says is serving two years in prison because he was using pot to treat his pain.

Christie challenged her, asking if she even know his stance on the issue, then went on to explain he supports medical marijuana only for people who have exhausted every other alternative and have the approval of two doctors.

While medical marijuana was already legal in the state, Christie signed a bill in September that would make it easier for minors to access edible marijuana for medicinal purposes and remove the limit on the number of marijuana strains that may be cultivated.

However, he has strongly insisted he would not go any farther in terms of loosening marijuana laws, arguing New Jersey would not become the next Colorado or Washington state.

As for the Malaysia Airlines jetliner that's been missing for nearly two weeks, one woman asked Christie why NASA wasn't involved in the search and recovery efforts.

Christie described the story as an "extraordinary mystery" and said he was "as mystified" as everyone else.

The governor acknowledged that in his job, he's not privy to that kind of information but said he trusted the Obama administration was doing its best to help.

"Sometimes as governor you know certain things that are going on, sometimes you don't. The one thing you don't ever do is, I think , speculate irresponsibly about this kind of stuff, if you're a person of authority or in government," he said.

"You keep quiet and talk about the things you know about, keep quiet about the things you don't," he continued. "While I have any number of disagreements on policy with the President, I certainly don't believe that the President would ever do anything that would impede with our country's ability or the world's ability to answer a question like this."