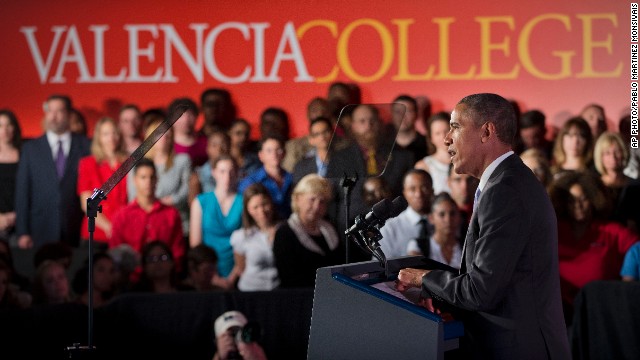 Orlando, Florida (CNN) - President Barack Obama's latest push in his much touted "Year of Action" is to help women get on an equal playing field with men.

Obama, speaking Thursday to a group of students and staff at Valencia College in Orlando, Florida, discussed his plan to give women more access to higher education and skills for the workforce.

"When women make less than men, that hurts their families, including their partners, their husbands, their kids. They have got less to get by on. It hurts businesses, because now their customers have less to spend," the President said. "When any of our citizens cannot fulfill their potential for any reason - that does not have to do with their talent or character or work ethic - that is holding us back."

Obama urged Congress to pass the Paycheck Fairness Act but noted that less than 20 percent of congressional seats are held by women.

"Right now the majority of the senators support that bill, but so far Republicans have blocked it. We have got to get them to change their minds and join us in this century," Obama said.

"Congress needs to act so that Americans join every other advanced nation on Earth by offering paid leave to those who work hard every day. It is time to do away with some of these workplace policies that belong in it Mad Men episode," he added.

Part of his overall economic message help the middle class, the President focused on ways to specifically help women and girls be able to afford getting a college education. His plan includes keeping interest rates low for student loans, increasing the maximum Pell grant to $5,730, and creating a new $2500 tax credit.

More women receive Pell grants or other federal scholarships than men and they also take out more federal loans than their male counterparts.

"We all have a stake in this. Women make up about half of our workforce. Over half of Valencia students - 56 percent - are women. In fact, for more than two decades, women have earned over half of the higher education degrees awarded in this country," he said. "That means soon, for the first time, America's highly educated workforce will be made up of more women than men. But, the thing is, our economy has not caught up to their reality yet."

Thursday's event was the first of five regional forums on women's issues that will culminate in the White House Summit on Working Families in June. Senior administration officials will host events in Denver, Chicago, San Francisco, Boston, and New York City.

The President said he had a personal stake in seeing women get ahead because his household is made up of 80% women. He wants to make it easier for his daughters in the future.

"I want to make sure that my daughters are getting the same chances as men. I do not want them paid less for doing the same job as some guys doing. When they have children, I want to make sure they are not having to quit their jobs, or, you know, in some other fashion be hampered, because we don't have the kinds of policies in this country that support them," he said.