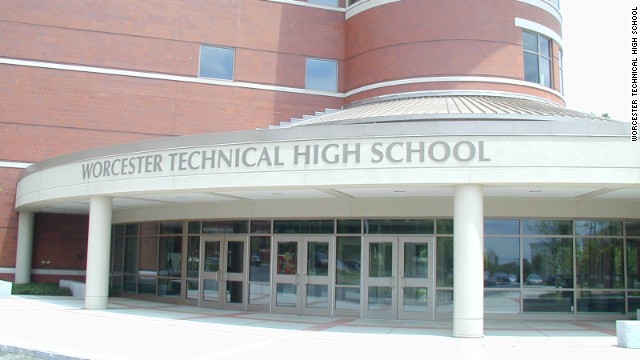 (CNN) - Worcester Tech High School Principal Sheila Harrity got the shock of her life, and then had to keep it secret for a week and a half. But, on Thursday she got the okay to reveal to 311 graduating high school seniors that President Barack Obama will be their commencement speaker.

A White House official says the administration picked the high school in the central Massachusetts city because the school, "has made outstanding headway in boosting its graduation rate, implementing cutting edge vocational programs, and ensuring that all of its students have the opportunity to succeed."

The White House adds that the President's address at the Worcester, Massachusetts school will be his only high school commencement speech this year.

Harrity says the White House asked her to keep the news quiet until they were ready to announce it. She asked if she could tell her students right before the news broke, and her contact agreed. Harrity set up a senior assembly meeting Thursday ostensibly to discuss putting the graduation together."

She says, "As I was going through my powerpoint and reflecting on their four year experience at Worcester Tech and incredible opportunities throughout their four years, I then announced that we have a commencement speaker, and flipped to the next slide and said, 'President Obama will be your commencement speaker.' At that point the students were totally in shock, and their mouths dropped and their eyes got as big as saucers."

"They were kind of wondering if I was just pulling their leg. And then their shock turned into tears.. and then it turned into hugs, high fives, fist pumping and sheer celebration in the auditorium. It's something I will remember forever, and I feel so fortunate that he selected our school," Harrity added.

Harrity says she didn't know the school was being considered, "until, I got an email with the subject line, 'Question from the White House.'"

Worcester Tech is one of the oldest career and tech schools in the country. Harrity says that, "In the late 1990's, early 2000's unfortunately we were the lowest performing high school in our city and one of the poorest performing vocational schools in our state."

But Harrity added that "our community rallied around a new $90-million facility which we opened in 2006. So we had that baseline, but there were certainly high expectations and our students and staff have certainly lived up and exceeded the expectations of our community. "

Harrity says the school's mission is to create what she calls, a "workforce pipeline." To that end, the school now operates and trains students on campus to run everything from a 125 seat full service restaurant, where students prepare meals and serve customers from the community - to a full service bank operated with the Worcester Credit Union. Students also manage and operate a L'OREAL/Redkin Day Spa on campus where the public can come in and get their hair done. There is even a 16 bay Toyota Garage on campus where students service 250 vehicles a month. Harrity says kids learn to change oil, and by the time they graduate can rebuild transmissions."

A student run graphics department handles all the printing operations for the City of Worcester.

"This year the school is putting together a partnership curriculum that trains students to work as linemen with the power company, National Grid," says Harrity, who added that some students decide they don't want to go to college, and for those students these programs send them out the door ready to work.

"Those are some of the things we do here, because we believe that authentic learning experiences are how students learn best, and it is all about trying to connect those relationships and partnerships so that our students can connect their academic learning to real world applications."

Harrity has been the principal at Worcester Tech since it reopened at the new campus in 2006. She started out in education as an elementary school teacher, and is proud that she was born and raised in Worcester and adds that she too is, "a product of Worcester public schools."