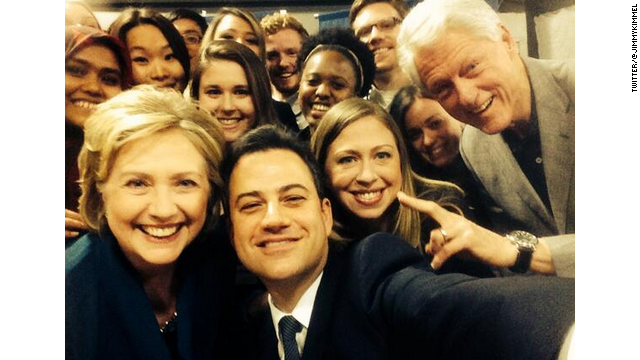 Clintons talk policy (not so much candidacy) with Jimmy Kimmel

(CNN) - Not even Jimmy Kimmel can get her to spill the beans.

Hillary and Bill Clinton and their daughter, Chelsea, joined the comedian and late night talk show host for the final night of the Clinton Global Initiative University conference, discussing everything from campaign trail stories to trade policy, to the inevitable question: Will Hillary run in 2016?

"I appreciate the sentiment," she said to a standing ovation. "I am very much concerned about the direction of our country,” adding, "It's not just who runs for office" but what they do once they get there.

As the former senator and secretary of state trailed off, Kimmel interrupted her, saying, "She wants an answer,” referring to the student who had asked the question, “If Clinton won't represent women in American politics, who will?”

"I'm getting to it," Clinton shot back with a laugh.

"I'm obviously thinking about all kinds of decisions," she said with a smile - before changing the subject to the prospect of grandchildren, an ongoing source of lighthearted chatter with her daughter.

While Kimmel couldn't get a 2016 answer, he did manage to snag a selfie with the Clinton family.

The evening was meant to be a capstone for the thousands of college students in attendance, after a long weekend of speeches and panels focusing on higher education and other issues facing the so-called millennial generation, those born in the early 1980s and into the 2000s.

The evening even started with some stand-up.

"Chelsea's parents couldn't get a sitter, so they're here tonight," said Kimmel, introducing the former president and his wife.

There was also the moment Kimmel asked the Clintons how they would have reacted if Chelsea told them she was a Republican.

"I'd say it'd been nice knowing her," quipped Hillary.

To the audience's delight, there were also competing accounts of how Bill and Hillary first met in Yale Law School.

Bill remembers an "interesting-looking woman" in one of his classes that he used to admire from afar - until one day she came up to him in the library and said, "If you're going to keep staring at me and I'm going to keep staring back, we should at least know each other's name. I'm Hillary Rodham. Who are you?"

Hillary remembers first hearing of a "Bill Clinton" when she was in the student lounge with friends and overheard someone say, "And not only that, we grow the biggest watermelons in the world."

"Who is that?" she asked her friends, who replied, "That's Bill Clinton, he's from Arkansas, and that's all he ever talks about."

"I think it's clear obviously where I came from," joked Chelsea. "I'm just incredibly grateful to watermelons and vending machines in the Yale Law library."

But there were moments of serious reflection and hard policy talk as well.

In a long talk about failures and successes, Chelsea shared one of the family's mantras: "It's always better to get caught trying."

Big policy debates were on the table as well. Hillary argued that climate change will be the biggest issue facing today's young people when they are her age, while Bill highlighted the global unemployment rates that have hit youth especially and the impact advances in technology and productivity have had on diminishing labor.

Bill also pointed to the growing polarization of America and how it has affected the country.

"We are getting rid of all our prejudices. We're not as racist, as sexist, as homophobic as we used to be. We have one remaining bigotry: We do not want to be around anybody who disagrees with us," he said. "I personally think that's not a good thing," arguing the differing perspectives and passionate arguments only make the country stronger.

For all the problems discussed, the Clinton family was optimistic about the future. Speaking to an audience of student leaders, they argued that millennials will make extraordinary strides for the better.

"[Millennials] are actually more active in participating in all kinds of activities," said Hillary, who spent several minutes taking "selfies" and shaking hands with students after the program. If Clinton does run in 2016, the youth vote will be critical to her winning the nomination or presidency.

Above all else, though, the evening was a window into the private lives of one of America's biggest political names.

Chelsea explained that despite the celebrity status and high-profile careers, her parents were always there for her and very supportive, challenging her from a young age to not only have an opinion, but also be able to defend it.

Even when her father was running for president in 1992, she said, there were only three nights that she did not spend without one or the other - and she only ever missed school for the presidential debates.

As it turns out, there may be no housewives - just some "Antiques Roadshow" - as well as jigsaw puzzles, long walks, and watching B-list action movies.

Count Hillary out for the movies though, says Bill. She’s grown out of them.