(CNN) - The law firm hired by New Jersey Gov. Chris Christie’s office to conduct an investigation into the lane closures at the George Washington Bridge will release the results of the internal review Thursday morning.

After spending nearly three months looking into who orchestrated the lane closures and why, a team of lawyers led by Randy Mastro - a member of former New York Mayor Rudy Giuliani’s administration - is expected to clear the governor of any wrongdoing. The report concludes that there is no evidence linking Christie to “plotting or directing” the traffic jams that are at the center of a political scandal roiling his administration, the New York Times reported on Monday.

END_OF_DOCUMENT_TOKEN_TO_BE_REPLACED

Washington (CNN) - Chris Christie continues to dance around the question of whether he will or won't run for the GOP presidential nomination in 2016.

But the New Jersey governor made one thing clear on Wednesday evening: the George Washington Bridge scandal is not having an impact on that decision now.

END_OF_DOCUMENT_TOKEN_TO_BE_REPLACED 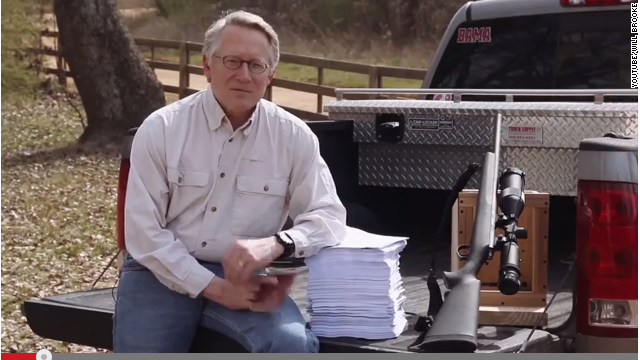 (CNN) - A U.S. House candidate in Alabama is literally shooting down Obamacare.

A video released by his campaign on Wednesday, shows Will Brooke using a variety of firearms to destroy a copy of the Affordable Care Act.

END_OF_DOCUMENT_TOKEN_TO_BE_REPLACED

DEVELOPING …. PRESIDENT OBAMA PREPARES FOR MEETING WITH POPE FRANCIS: Bloomberg’s Margaret Talev reports: “Obama will meet Thursday with Pope Francis at the Vatican as the American leader struggles with declining influence at home and abroad. He’s also trying to gain favor with two of the pope’s main constituencies in the U.S.: the working poor and Hispanics.”

QUOTE OF THE DAY: SPEAKER JOHN BOEHNER REACTS TO LATEST OBAMACARE EXTENSION AT A GOP PRESSER: 'What the hell is this, a joke?'

END_OF_DOCUMENT_TOKEN_TO_BE_REPLACED

(CNN) - In his strongest language to date, possible 2016 Republican presidential contender Rick Santorum said he's "very open to taking on another run" for the White House.

In a taping Wednesday on the Iowa Public Television program "Iowa Press," Santorum was asked about his visit to the Hawkeye State, which holds the first contest in the presidential caucus and primary calendar, and whether the "door's open" to another bid for the GOP nomination.

END_OF_DOCUMENT_TOKEN_TO_BE_REPLACED

(CNN) - Democrats in jeopardy of losing control of the Senate this year unveiled a 2014 agenda on Wednesday filled with carefully crafted language and messaging aimed at middle class voters they believe will decide many key races.

Dubbing it a "Fair Shot for Everyone," and using the words "fair" or "fairness" in as many sentences as they could, Senate Democratic leaders announced they will focus on issues like raising the minimum wage, making college and child care more affordable, and closing tax loopholes that encourage companies to hire overseas.

END_OF_DOCUMENT_TOKEN_TO_BE_REPLACED

IRS agrees to hand over emails to Issa

(CNN) - Following heated exchanges with House Republicans, IRS Commissioner John Koskinen on Wednesday told a congressional committee that he will hand over all of the emails of Lois Lerner, the former IRS official under investigation for the agency's targeting of conservative groups.

But Koskinen also told frustrated Republicans that producing all the documents the committee wants will take "years," indicating that the matter is far from settled.

END_OF_DOCUMENT_TOKEN_TO_BE_REPLACED

Boehner rips latest Obamacare extension: 'What the hell is this, a joke?'

Washington (CNN) - House Speaker John Boehner ripped a decision to extend the March 31 Obamacare enrollment deadline for some people who have not finished signing up.

"What the hell is this, a joke?" he said on Wednesday of the Obama administration’s latest change in carrying out the politically charged health law.

END_OF_DOCUMENT_TOKEN_TO_BE_REPLACED

(CNN) - Sarah Palin announced Wednesday she's throwing her support behind Joni Ernst for an open U.S. Senate seat in Iowa, picking up on the GOP candidate's new campaign theme of cutting "through the pork" in Washington.

The former Alaska governor, 2008 vice presidential nominee, and conservative firebrand said in a post to her Facebook page that if Deb Fischer, a Republican senator from Nebraska who Palin backed in 2012, "can see through the bull in Washington, then Iowa's Joni Ernst can help her cut through the pork."