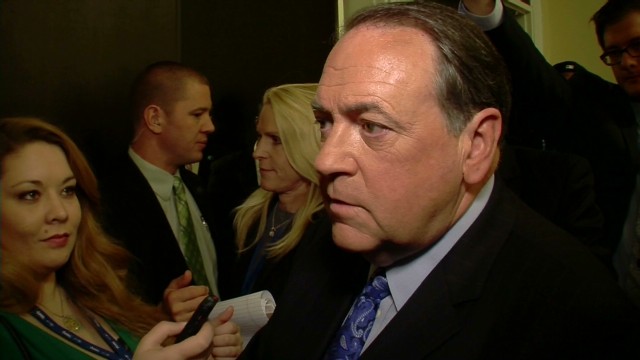 The sources say that the 2016 presidential race and the possibility of another Huckabee candidacy were the topics of conversation during the meeting, and that the larger than expected crowd encouraged Huckabee.

While in Washington Tuesday and Wednesday, the sources say that Huckabee is also attending other meetings, including one at the Republican National Committee. He is doing some fundraising for HuckPAC, the political action committee he founded back in 2008 to promote conservative causes.

The sources said that regarding another White House bid, "all options are on the table" and that Huckabee's "taking the steps necessary should he decide to run."

Huckabee, who's also a pastor, won the January 2008 Iowa Republican caucuses, which kick off the presidential caucus and primary calendar, propelling his once long-shot campaign. He ran a strong second in many of the following primaries and caucuses to eventual GOP nominee Sen. John McCain, thanks in part to his strong support among social conservatives, who are an important part of the Republican party's base.

Late last year Huckabee started talking like someone who was interested in running for president again. It was a very different language than what we heard from Huckabee prior to the 2012 election cycle, which the Fox News Channel weekend host sat out.

Huckabee held meetings in Iowa and South Carolina, which holds the first southern primary, talking not only to social conservatives but also but also business leaders, many of whom were suspicious of his economic populism during his 2008 run.

In an interview with the Washington Post late last year, Huckabee said he was receiving encouragement to launch another campaign "from places where I never got it before," including "business, people some would maybe call the establishment."

At the end of last year Huckabee told Fox News that there was about a 50-50 chance he'd run for president again in 2016, and said he'd make final decision after November's midterm elections.

Next month Huckabee speaks at a Faith and Freedom Coalition event in Des Moines, Iowa and at a "Freedom Summit" in New Hampshire, which holds the first in the nation primary.

And 65% of Iowa Republicans questioned recently in a Des Moines Register poll said they thought it would be a good idea if the former Arkansas governor ran for president again.