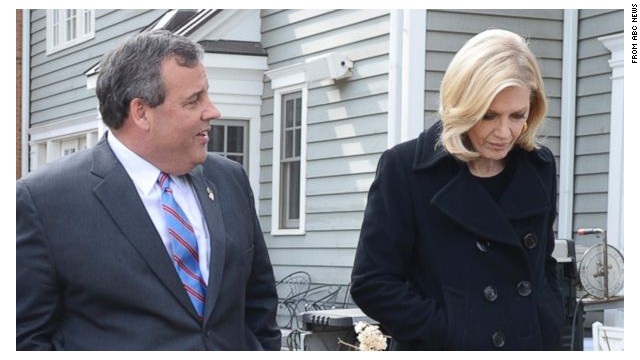 In fact, he says Hawkeye State voters like him almost as much as corn dogs at the state fair.

"I think they love me in Iowa, too," Christie told ABC News' Dianne Sawyer in an exclusive interview that aired Thursday evening.

While the New Jersey governor's very public tussle with the question of running for president in 2016 moves toward an answer as slow as molasses in January, the Republican name-checked the early voting state as a potential building block for a would-be campaign.

"I've been there a lot," Christie said of the state. "I think they love me there, too, especially because of the way I am."

Christie has come under fire over a political scandal roiling his administration.

State legislative and federal investigators are looking at whether traffic jams were orchestrated by top appointees near the George Washington Bridge in Fort Lee last year as political retribution against the town's Democratic mayor for not endorsing Christie for reelection.

A report released on Thursday by a team of private lawyers hired by Christie's office to scrutinize the issue cleared him of having any knowledge of the matter until after it all occurred, a point the governor has made previously.

But the saga has called into question his sometimes brash leadership style that helped propel his rise to national prominence.

Despite the governor's insistence that Iowa voters "love" him, Christie's stock in the state has slipped during the fallout from the bridge imbroglio that has engulfed several top appointees.

A Des Moines Register poll from earlier this month indicated 57% of Iowans disapprove of the way Christie handled the scandal. Republicans in the state were not much kinder to the potential candidate: 47% said the New Jersey governor's response was lacking.

Christie's stock has also fallen in relation to one potential 2016 rival.

A Quinnipiac University poll released earlier this month showed Christie trailing former Secretary of State Hillary Clinton, 48% to 35%, among Iowa voters, a dramatic shift from when the New Jersey governor led the Democrat and potential White House candidate by 5 points in a December poll.

Running for a record sixth-term, Branstad backed Christie amid calls for New Jersey's chief executive to resign his post as RGA chair over the scandal.

But the longtime Iowa pol predicted that winning over voters in his state, who kick off the caucus and primary calendar, could be tough tomatoes for Christie.

"Wouldn't hurt to be a little more humble," Branstad told the Los Angeles Times in February. "Iowans really like their leaders to be hard-working and humble."

Still, Christie insisted again, like he did on Wednesday night on his "Ask the Governor" radio program, that the impasse for his administration will not weigh on his decision about 2016.

"I don't intend to make a discussion about 2016 until a year from now," Christie said. "But it won't have anything to do with what has happened in the past 10 weeks."

"What has happened in last 10 weeks, I think will ultimately make me a better leader, whether it's governor of New Jersey or any other job I might take in the public or private sector," he added.