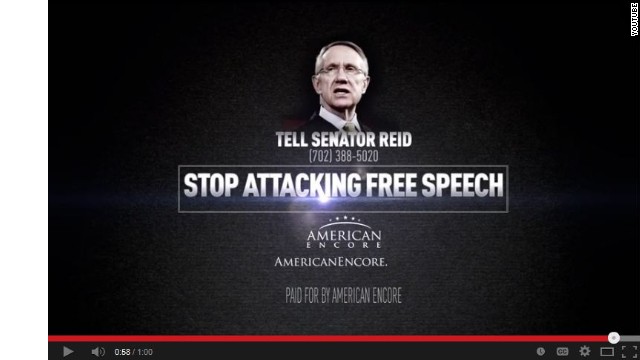 The minute-long spot features a clip of Reid on the Senate floor blasting the billionaire business titans Charles and David Koch, who have steered hundreds of millions of dollars to conservative causes in recent election cycles without disclosing their donors, "as un-American as anyone that I can imagine."

American Encore is spending $30,000 to air the commercial for a week on Las Vegas cable, beginning Monday. It's accompanied by a digital ad buy.

The group, a 501(c)4 organization that launched earlier this month, plans to spend $10 million this midterm cycle against Democrats who have been critical of outside campaign spending.

Noble, the organization's founder, formerly headed the Center to Protect Patient Rights, a Koch-affiliated group that funneled almost $200 million in undisclosed contributions to conservative entities like Americans for Prosperity and the National Rifle Association between 2009 and 2012, according to the Center for Responsive Politics.

American Encore has already aired a TV ad in Minnesota that attacked Democratic Sen. Al Franken, who is up for re-election this year. Reid is not on the ballot again until 2016.

UPDATE: The Nevada Democratic party condemned the ad in a statement Monday.

"The Koch brothers' extreme agenda of privatizing Social Security and ending Medicare as we know it to pay for tax breaks for corporations that ship American jobs overseas is out-of-touch with Nevada. Fortunately, Nevadans have Harry Reid fighting for a strong middle class and a growing economy."