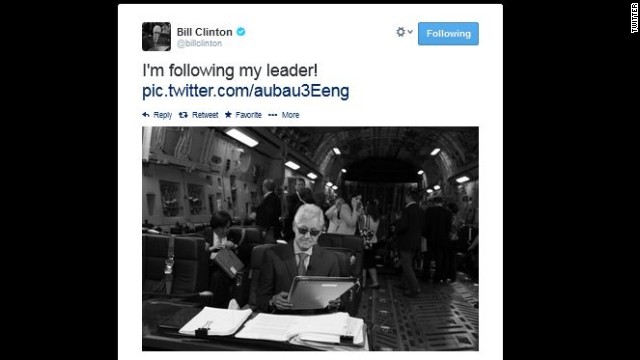 The image appears to be Bill Clinton edited into his wife's Twitter profile picture, a meme-friendly image that went viral in 2012. The former secretary of state can be seen staring down at her BlackBerry on a C-17 transport to Libya while wearing a pair of shades.

The photo on Bill Clinton's Twitter account has the same people in the background, only it's the former President who's seen glaring at a device.

Hillary Clinton tweeted back: "Well, that explains what happened to my iPad!"

The original photo, taken by Diana Walker for Time magazine, inspired the tumblr, "Texts from Hillary," which kicked off in April 2012. Using memes, the website imagines conversations that Clinton has with celebrities or political figures who are also shown looking at their phone.

Hillary Clinton embraced the website, inviting Adam Smith and Stacy Lambe, the co-creators of "Texts from Hillary," to her office and presenting them with her own version of the meme.