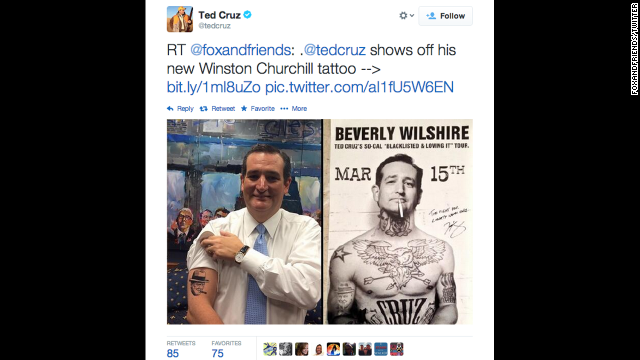 (CNN) - Sen. Ted Cruz rolled up his sleeve Tuesday to show off his new "tattoo."

The inked up arm was one of a number of April Fools’ pranks that played out in the political world.

For Cruz's part, the Texas Republican was doing an interview on "Fox and Friends" when the hosts noted he wasn't wearing a suit jacket over his white-collared shirt.

The senator mentioned some street art that he saw in California earlier this month, depicting a tattooed-clad (and rather buff) Cruz.

Saw this, but noticed an error. So I wanted to make one thing clear: I don't smoke cigarettes http://t.co/3nn2740kkP pic.twitter.com/tPFNqg9vu8

"Politics is a strange thing. It inspired me," he said as he rolled up his sleeve to reveal a face on his upper arm. "I'm proud to stand with Winston Churchill."

"I got to say my wife was fairly astonished," he added.

Asked if it was real or not, Cruz noted the calendar: April 1. He later tweeted a photo of his new arm buddy.

Others also had fun with the first day of April.

The Republican National Committee blasted out an email and a tweet, announcing the GOP was changing colors, abandoning red for the color blue that's traditionally affiliated with Democrats.

"The RNC has made a commitment to attracting new voters and revitalizing the image of the Republican Party," RNC Chairman Reince Priebus said in a statement. "This unprecedented color swap sends a clear signal that we're serious about change - and that we're making a clean break with the recent past."

Priebus argued Democrats can use the color red, saying it will fall in line with their record of "red tape, red lines and red ink."

The RNC also announced it was rolling out a new logo. It directed readers to a link to see the new brand, but the link connects to a website that says in big letters: "APRIL FOOLS!"

Down South, the Florida Republican Party tweeted an image of a "breaking news" article that claimed Democratic gubernatorial candidate Charlie Crist had once again changed his political affiliation.

"Although this sounds very believable, sadly Crist has not made a fool of himself and this is just a silly April Fools’ joke," the faux-article stated.

Crist, who’s running for his old job as governor, was formerly a Republican who turned Independent and is now a Democrat.

And while it wasn't quite an April Fools' prank, former President Bill Clinton got in on the laughs as well.

His Twitter account posted an image that appears to be Bill Clinton edited into his wife's Twitter profile picture, a meme-friendly image that went viral in 2012.

In the famous picture, the former secretary of state can be seen staring down at her BlackBerry on a C-17 transport to Libya while wearing a pair of shades.

The photo on Bill Clinton's Twitter account Tuesday has the same people in the background, only it's the former President who's seen glaring at a device instead in a pair of sunglasses.