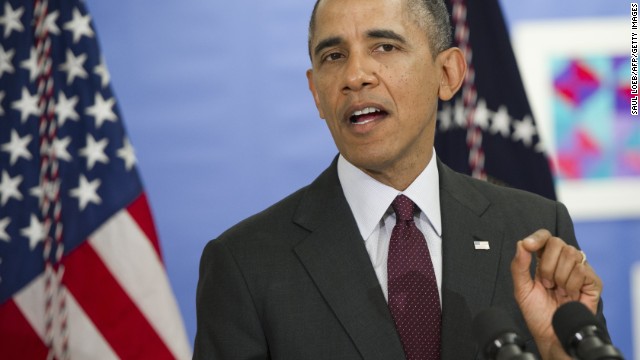 Speaking to a rowdy crowd at the University of Michigan, Obama used much of his remarks to lambast Republicans who oppose such a hike, saying it amounted to giving working-class Americans "the shaft."

"You would think this would be a no-brainer," Obama said of his proposal to raise the minimum hourly rate nearly three dollars, to $10.10 per hour.

Using Detroit industrial pioneer Henry Ford as an example, Obama said the country as a whole would gain if workers earned more than $7.25 an hour. A century ago Ford surprised and angered competitors when he doubled the pay of his autoworkers to $5 a day. The move was designed to help foster employee loyalty and tamp down high turnover in his plants.

"Raising the minimum wage is not going to solve all of our economic challenges," Obama said on Wednesday. "As Americans we understand that some people will earn more than others. But here's one thing we do believe - no one who's working full time should be raising their family in poverty."

Obama has made the wage pitch at events across the country over the past several months. Some states have already increased their minimum wages, and the President has encouraged business owners to voluntarily pay hourly employees at the higher rate.

"There are always going to be folks who do critical work – who bust their tails everyday – airport workers, restaurant workers, hospital workers, retail sales people who deserve an honest day’s pay for an honest day’s work," he said. "They are doing necessary jobs, they should be able to make a living."

During his stop in Ann Arbor he dropped in for Reuben sandwiches at Zingerman's, the popular deli that pays workers above minimum wage.

As part of his effort Obama in January signed an executive action that mandated all workers on federal contracts be paid at least $10.10 an hour.

The chances of seeing Congress OK an increase to the federal minimum wage appear nonexistent, at least ahead of this November's midterm elections. Republicans are fiercely opposed, and even some Democrats are wary the plan could hurt their chances among business-minded voters.

The White House, however, has remained confident the issue will help Democrats among voters, since it allows them to paint Republicans as opposed to higher paychecks.

"There certainly is a good opportunity for Democratic candidates to talk about this on the stump," said Josh Earnest, the deputy White House press secretary, on Wednesday. "The values of raising the minimum wage align…with the vision the President has articulated."

The GOP, meanwhile, contends an increase would be a job killer. They point to a report from the nonpartisan Congressional Budget Office showing Obama's proposed increase would cost the economy half a million jobs. (The report also indicated such a hike would help bring millions of Americans out of poverty.)

In Washington, moderate Republican Sen. Susan Collins said this week she was looking for lawmakers from both parties to support a wage increase – though she said she didn't support a hike to Obama's preferred rate.

In Michigan, the wage fight is being fought at the state level, with the group Raise Michigan pushing lawmakers to lift the state's $7.40 hourly minimum wage to Obama's preferred $10.10 per hour.

Raising the national minimum wage appears to be popular with many voters. According to a new Quinnipiac University poll released Wednesday morning, half of registered voters nationwide said they would be more likely to vote for a candidate who supports raising the minimum wage, with a quarter saying they'd be less likely to vote for that candidate, and one in four saying it wouldn't affect their vote.

At his event in Ann Arbor Wednesday, Obama was joined by Democratic Rep. Gary Peters, who's running in a very competitive race to try and keep the seat of retiring six-term Sen. Carl Levin in party hands.

Peters, who also appeared with Obama during a visit to East Lansing in February, is one of the few Democratic Senate hopefuls who has so far been willing to attend events with the President. Incumbents have cited Congressional responsibilities in Washington when missing Obama speeches in their home states.

Many were wary of aligning themselves with Obama's health law, a key component of which-the federal website–faltered at its launch. But the administration winded up exceeding its goal of enrolling 7 million Americans.

White House officials, speaking after the enrollment announcement this week, noted that no Democrat had yet defected on the law. The unexpected success in sign-ups would hurt Republicans, the officials reasoned, since voters who now have health insurance won't be receptive to candidates advocating the law's repeal.

Following his event on the campus of the University of Michigan, Obama heads to Chicago for two fundraising events for the Democratic National Committee.