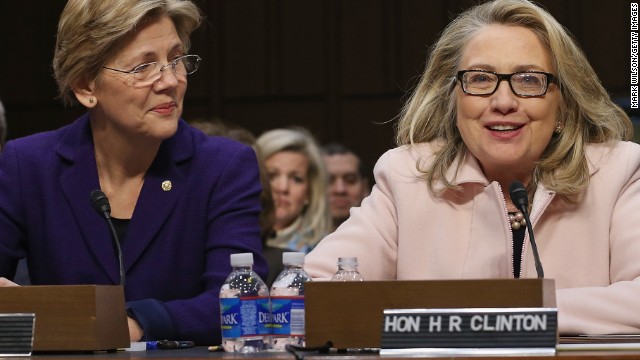 (CNN) - Freshman Sen. Elizabeth Warren is the hottest politician in the country right now, according to a new national poll.

The poll asks voters nationwide to rate their feelings towards political leaders by choosing any number between 0 to 100, with the higher the number, the warmer or more favorable voters feel about that political leader.

Topping Quinnipiac's latest thermometer is Warren, with a mean temperature of 48.6 degrees. But nearly half of those questioned did not know enough about the Democratic senator from Massachusetts to form an opinion. Warren, a favorite with many in the progressive wing of the Democratic party, has said she won't run for President in 2016.

Recognition not a problem when it comes to Hillary Clinton, as only one percent didn't know enough about her to form an opinion. The former secretary of state, who's seriously considering a second run for the Democratic presidential nomination, came in second at 47.8 degrees.

Christie, the GOP governor of New Jersey, who along with the above mentioned Republicans, is mulling a 2016 bid for the White House, came in ninth at 45.2 degrees. That's down from 55.5 degrees in Quinnipiac's early January poll, which Christie topped.

That January survey came out just as the George Washington Bridge controversy was beginning to grab national headlines. Garden State lawmakers and the U.S. Attorney's Office are looking into allegations that top Christie appointees orchestrated traffic jams last September by closing access lanes to the nation's busiest bridge in Fort Lee, New Jersey, to politically punish that town's mayor for not endorsing the governor's 2013 re-election.

Christie has denied knowing anything about the gridlock until after it occurred, and has said he knew nothing about any political mischief by members of his administration. Last week a review commissioned by Christie's administration cleared the New Jersey governor of any wrongdoing in the bridge controversy, which has put a cloud over his political future.

The Quinnipiac University poll was conducted March 26-31, with 1,578 registered voters nationwide questioned by telephone. The survey's overall sampling error is plus or minus 2.5 percentage points.