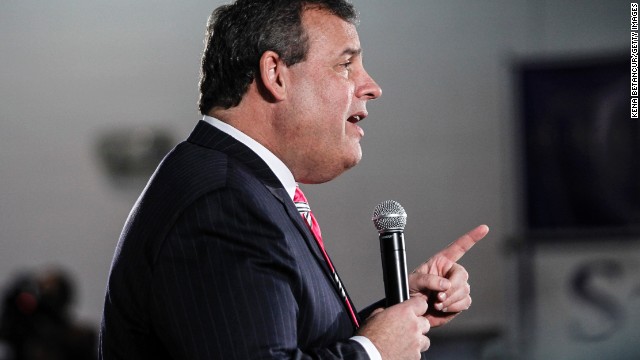 Fairfield, New Jersey (CNN) – New Jersey Gov. Chris Christie explained Wednesday where he stands on a recent push by President Barack Obama and congressional Democrats to increase the minimum wage, saying he’d only support it if it was done in a “commonsense way” and phased in “over a period of time.”

At a town hall in Fairfield, the Republican governor was also pressed twice on the question of improving the availability of edible marijuana for sick children, a product that was made legal last year but has been scarce and difficult to obtain.

Asked by a student about his stance on raising the minimum wage nationwide, Christie reminded the audience that he vetoed a minimum wage increase bill last year because it raised the rate “too much, too soon.”

The Democratic-controlled legislature sent over a bill that would raise the wage to $8.50 from $7.25, but Christie turned it down and offered an alternative of raising it by $1 over three years.

Democrats rejected the proposal and put the measure on the ballot in November’s gubernatorial election, when Christie won a second term.

Voters overwhelmingly approved the ballot initiative, raising the wage to $8.25 starting in January, and amending the state’s Constitution to ensure that the minimum wage continues to rise with inflation.

“I think that's a really bad idea. I think in the long run it will end up costing jobs,” Christie said, but added “that's the rule of the law of the state right now. In fact it's constitutional. The legislature can't change it anymore,” he continued. “Crazy way to do business, let me tell ya.”

The White House and congressional Democrats, who are making the issue a theme in this year’s midterm elections, argue a nationwide increase to $10.10 would benefit millions of workers, increase productivity and lower turnover.

But critics say it would hurt the economy.

Christie, who’s considering a run for president in 2016, did not say he was outright opposed to a minimum wage hike nationwide, but stressed it should only be done under the right conditions.

“It's one of those things that sounds really good,” he said. “No one's against it, but we got to deal with the realistic nature of our economy that's still only growing between 2 and 3 percent, so it's not like we have some robust, exploding economy that's going to be able to support all of this.”

At the town hall, Christie faced more questions from struggling parents who say they’re trying to get medical marijuana in edible form for their children. He’s been asked about the issue with increasing frequency at town halls this year.

While Christie has signed a bill that allows dispensaries to sell edible marijuana for children only, the state's dispensaries are selling very little due to low demand, Christie said. Patient advocates also say the process to obtain the substance is too expensive, bureaucratic and lacking of doctors willing to participate in approving the prescription.

Paula Joana, whose daughter Sabina Rose died of Dravet syndrome last fall at the age of 15 months, tearfully asked the governor to force dispensaries to provide the edible marijuana. Her family had been waiting two months to get it for their daughter when she died.

“We’re continuing to try to help to figure this out,” Christie said. “I didn’t think we were going to have to force people to produce something. Now, we’re seeing that we may have to.”

The governor warned, however, that those dispensaries may not want to do business in the state anymore if they don’t make profits.

It was the second question he took Wednesday about the issue. But he reiterated his concern that expanding marijuana laws could put the state on a slippery slope toward legalizing the substance, something he refuses to let happen.

According to a Monmouth University/Asbury Park Press poll released Wednesday, New Jersey residents are split on the idea of legalizing pot, which some lawmakers support in the state legislature.

Forty-eight percent of residents say it should be legal for people to possess small amounts of marijuana, while 47% oppose legislation that would do so.