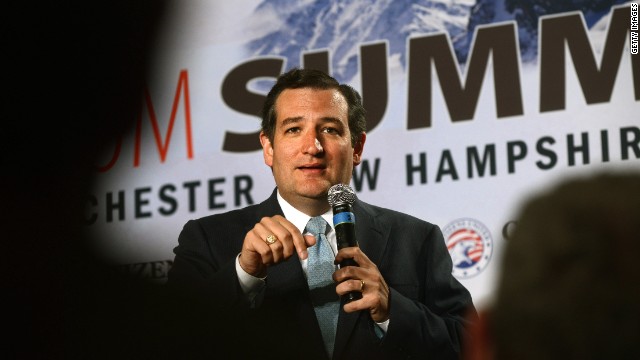 A smattering of potential 2016 hopefuls looking to bank early points among Granite State conservatives sounded familiar refrains and trained their fire on oft-used targets at a New Hampshire summit on Saturday.

But all those addressing the crowd Saturday fed the attentive listeners traditional conservative recipes featuring lots and lots of red meat.

Despite President Barack Obama administration's announcement that enrollment in the Affordable Care Act spiked to 7.5 million, exceeding the government's stated goal, Republicans seized upon the shaky rollout of the federal exchanges and questioned the legitimacy of the numbers touted over the last two weeks by administration officials.

Texas Sen. Ted Cruz said the ever-shifting enrollment deadline and the President's repeated delays of key provisions of the law, such as the employer mandate, represent what he termed a "pattern of lawlessness."

"There's a pattern of lawlessness in this administration, ignoring law after law after law," Cruz told the gathering. "Please take Obamacare. Thirty times, this president has unilaterally changed the law. There's no authority in the law for that."

Kicking off the event, Sen. Kelly Ayotte, R-New Hampshire, who many speculated was among the running for the vice presidential nomination during the last election cycle, sounded the horn for repeal-and-replace while pointing toward Democrats, especially those in red states, running away from Obamacare.

"Everything they know that will hurt them electorally...they will change now," Ayotte said of the law.

One of the more anticipated speakers, Sen. Rand Paul, R-Kentucky, honed in on a controversial aspect of the law that requires for-profit employers of a certain size to offer insurance benefits for birth control and other reproductive health services without a co-pay. Certain companies have attempted to buck the requirement, claiming that doing so would violate their owners' long-established religious beliefs.

Though the Supreme Court is not expected to rule on two companies challenging the law until June, Paul left no doubt that he believes the provision violates the Constitution.

"Now some will say, 'you can have religious freedom and the Obamacare mandates.' They're mutually inconsistent," Paul said. "They cannot work together."
"Some say, 'Oh well, you know, just give up on your faith and you can stay in business, or give up on your business to stay true to your faith.' That should not be a question," he continued.

"That should not be something that American business has to answer. We should not force people to buy things they don't want and go against their religious morals," Paul concluded.

"You know the President loves to say conservatives hate women; there is a war on women, and that the only thing women care about is birth control," Blackburn said. "Mr. President, blessed your little heart. Women aren't a cheap date. Women want a little bit more out of life than contraceptives."

In one of her first appearances in the early primary state, Blackburn tried to make a big impression by both harping on Obamacare and taking a cudgel to another favorite Republican target: Senate Majority Leader Harry Reid. Giving a nod to the hosts, AFP, the Tennessee lawmaker drew raucous applause when she played pollster and gave her electoral forecast.

"Oh, poor Harry! He's not happy," Blackburn said. "But I tell you what I think Harry Reid knows the exact same thing you and I know: 206 days from today we are going to take back the U.S. Senate."

A Blackburn aide told Real Clear Politics on Friday that the congresswoman is contemplating running for the Republican nomination in 2016.

The other prominent target for Republican ire at the confab was exiting Health and Human Service Secretary Kathleen Sebelius, the two-term Kansas governor-turned Obamacare-chief defender. Sebelius tendered her resignation after the problem-plagued rollout of Healthcare.gov, though senior administration officials insist her decision had little to do with the initial uproar over the website.

"They will tell you that Kathleen Sebelius resigning is a result of Obamacare's success," Cruz said. "Well, if that's true, then I hope every Democrat will follow her path and resign as well."

Billionaire Donald Trump also poked fun at the Kansan, making light of a gaffe during her closing speech. Sebelius announced from the podium in the middle of her Friday address that a page from her prepared remarks had gone missing.

"I think it's going to be one of the great classic lines in the history of politics and incompetence," Trump said. "And that's emblematic of Obamacare. A page is missing. The whole thing is missing."

But Obama, Reid and Sebelius weren't the only names that roused the ire of the conservative crowd.

In his remarks Saturday morning, Trump, who most recently teased about running for governor of New York before announcing his intent not to seek that office, incited boos when he mentioned former Florida Gov. Jeb Bush.

Speaking about Bush's recent comments that undocumented immigrants coming to the United States is an "act of love," Trump labeled the more moderate stance on immigration as "out there."

Bush drew considerable conservative backlash when he made the comments in a recent interview, but defended them at a Connecticut Republican Party dinner on Thursday, where he further urged "sensitivity to the immigrant experience."

"I heard Jeb Bush the other day," Trump began, prompting an initial murmur of boos and groaning from the crowd.

"And he was talking about people that come to this country illegally, they do it for love," he continued, the boos growing louder.

"And I said, 'Say it again … that's one I've never heard of before,'" Trump added, drawing scattered laughter from the room.

"It's out there," Trump pronounced.