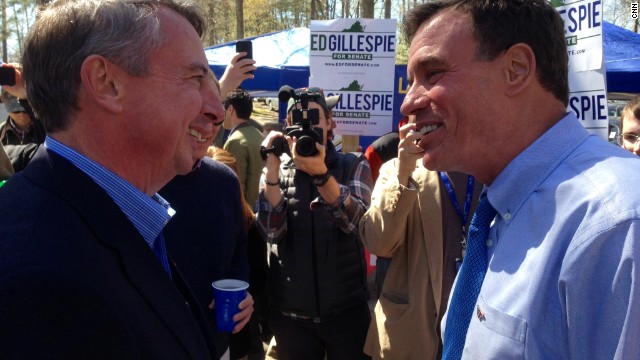 In the Virginia woods, Mark Warner is trailed by Obamacare

Wakefield, Virginia (CNN) – Mark Warner was weaving his way through the crowd on a chilly Wednesday afternoon at the Shad Planking, the annual Virginia fish fry that brings beer-sipping politicos together in the tall pines of southeastern Virginia, when a burly man sporting an NRA sticker approached.

“Senator, did you read the Affordable Care Act before you voted for it?” he asked.

“I’ve outlined a series of changes to it,” he said, gripping the man’s shoulder and jabbing his finger. “Five separate bills.”

The Democrat moved along briskly, back-slapping longtime supporters but also facing down several more questions about the health care law he supported from hostile interrogators, most of them backing Republican Ed Gillespie, his likely challenger this year.

With his signature grin and rolled-up sleeves, Warner answered them all like the seasoned politician he is. But the specter of the Obamacare pecked at him throughout what was supposed to be a light-hearted afternoon of backwoods politicking and friendly bipartisan joshing.

The drive into the 66th annual Shad Planking along Brittles Mill Road in Wakefield was dotted with hundreds of pro-Warner campaign signs. But they were overshadowed by a series of larger placards paid for by the Republican Party of Virginia. “Mark Warner Betrayed Virginia,” they read. “Obamacare’s Deciding Vote.”

Warner has a big lead over the little-known Gillespie early polls, and the Republican still has to secure the Senate nomination at a convention in June. But inside the event, Gillespie supporters appeared to outnumber Warner backers by a wide margin.

Gillespie had arrived earlier, trailed by staffers and a small horde of volunteers hoisting campaign signs. The first-time candidate, a veteran GOP fixer and lobbyist, worked his campaign booth, handing out beer and taking questions from reporters.

“The problem with Sen. Warner is with his record,” Gillespie said. “The more Virginia learns about that record, they’ll be surprised because it’s also at odds with how Sen. Warner portrays himself back home. He is not the independent voice he portrays himself to be, voting 97% of the time President Obama and Harry Reid.”

On his way out of the woods, Gillespie bumped into Warner, the first time the two have crossed paths as rival candidates. They chatted briefly about Terry McAuliffe, the new Virginia governor who chaired the Democratic National Committee a decade ago when Gillespie ran the Republican National Committee.

Polls: Warner way ahead of Gillespie in Virginia

Warner was booked as this year’s headline speaker. He was introduced by John Hager, a former GOP lieutenant governor, who heralded the event’s bipartisan conviviality.

“Looks like there’s lots of good gettin’-together,” he chuckled as he surveyed the audience.

It wasn’t always that way: The event was started by the segregationist Democrats who used to dominate politics in the commonwealth. Today, women and African-Americans are allowed to participate, but the Shad Planking retains a conservative bent. Wednesday’s vest-wearing crowd was mostly white and mostly male, part Garden and Gun, part Guns and Ammo.

In keeping with the spirit of the day and his own political centrism, Warner avoided charged rhetoric in his brief talk on stage. A former governor and Democratic Party chairman, it was his fourth career appearance at the Shad Planking. He had warm words for the Republicans sitting next to him on stage, including George Allen, the former governor and senator who had a wad of tobacco stuffed into his lower lip.

Warner declined to roast Gillespie, as speakers often do with their opponents here. His jokes were instead about Virginia’s shifting electoral landscape.

“Of course, I know among this crowd I represent an endangered species – a Virginia Democrat,” Warner cracked. “Not unlike Republican women, our numbers here are few.”

His speech was peppered with feel-goody nods to “the Virginia way,” commonwealth shorthand for a genteel manner of across-the-aisle deal-making that “produces results.” The happy talk glossed over the grid-locked realities of do-nothing Washington and the ideological warfare unfolding in the state capital of Richmond, where a battle over Medicaid expansion could force a government shutdown.

Warner huddled with the press after his speech. They wanted to know what elements of his Senate record he would feature in his campaign. He was quick to pivot back to his accomplishments as governor, mainly his landmark 2004 tax reform deal and successful efforts to boost Virginia’s business-friendly reputation.

“What Virginians have always appreciated is people who get stuff done,” he said.

But what about his Senate record?

Warner talked about his “efforts” on issues like debt, infrastructure, immigration, housing and finance - but not health care. He referenced his work with bipartisan “gangs” in the Senate, where “being a gang member is a good thing.”

He punted when asked if he would welcome President Barack Obama to campaign with him before November.

As examples, Warner pointed to entitlement reform and energy policy, specifically his support for the Keystone XL Pipeline and offshore oil and gas drilling.

“So that’s a maybe?” a reporter followed up.

Warner was already moving on to shake the next hand.