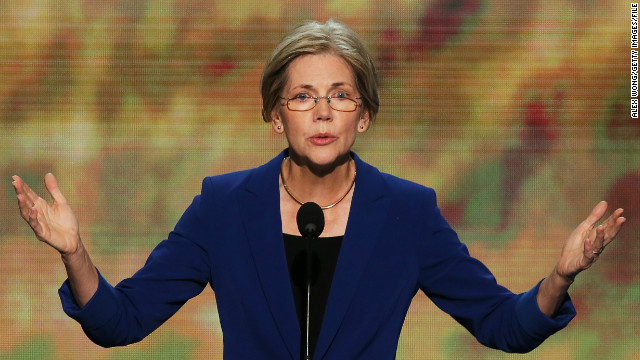 The Progressive Change Campaign Committee announcement Tuesday that it's forming a national progressive book club comes on the same day of the official book release from the freshman senator from Massachusetts. The group is encouraging its nearly one million members to purchase Warren's memoir, titled "A Fighting Chance," and spread it on social media.

Starting with Warren's book, PCCC's inviting it's members to read a book every few months, followed by a national call with the author. The group is also considering local book parties as part of their plan. PCCC says over 14,000 of their members have already signed up to be part of the book club

PCCC was the major grassroots backer of Warren in 2012, both in urging her to run and in supporting her campaign against then-Sen. Scott Brown. The group raised over $1 million for Warren's campaign and says it made over half a million calls to voters on her behalf.

"In 2012, PCCC members rallied around Elizabeth Warren's economic populist message and we were her #1 grassroots supporter. In 2014, we'll help her rise to #1 on the best seller list," said PCCC co-founder Stephanie Taylor, in a statement.

Warren is a former Harvard University Law School professor who served as a senior advisor under President Barack Obama in setting up the Consumer Financial Protection Bureau, before returning to Massachusetts to run for the Senate.

While many progressives have urged Warren to make a bid for the White House in 2016, she has repeatedly said she's not running for president.

In her memoir, Warren details her life story while also laying out her case for a more level playing field in the country's economic marketplace.

In her book, Warren credits the PCCC efforts on her behalf in 2012, writing that the group "signed on early with the petition encouraging me to run, and they stayed with me every day right through the election."