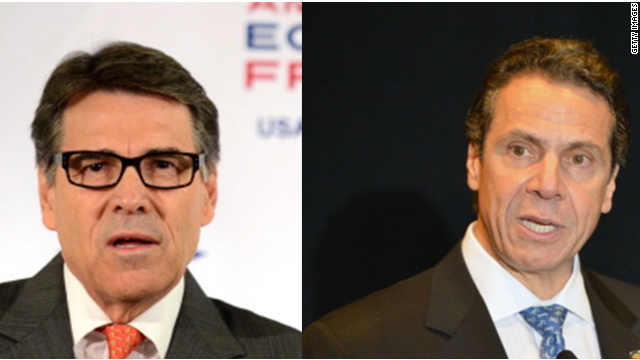 (CNN) - Texas Gov. Rick Perry, who openly competes with other governors by trying to lure businesses to the Lone Star State, is now taking his strategy one step further.

Both are considered potential presidential candidates, though Perry, a Republican, has been much more active in building his national profile.

Perry is in the Empire State until Thursday, meeting with business leaders and touting the economy in Texas compared to that of New York.

His office points to a report by the Tax Foundation, which rates New York as the state with the worst business tax climate. New Jersey is also tied for last place. The report cites New York's individual income tax, which ranges from 4% to 8.82%, as one of its biggest problems.

"If you're tired of New York, there's an option: Texas," he says in the spot.

However, on March 31, Cuomo signed into law a new state budget that reduces the corporate income tax rate from 7.1% to 6.5%, and includes other reforms.

The Tax Foundation applauded the corporate tax overhaul, saying the changes "are impressive and will greatly reduce complexities and burdens in New York's corporate tax structure.

It's not the first time Perry has gone after New York businesses. The governor, who's not running for re-election next year, has also launched campaigns in California, Illinois, Connecticut, and Missouri.

While it's not uncommon for governors to court out-of-state businesses, it's typical for them to do so under the radar, not out in the open like Perry. His efforts further fuel speculation that he's considering another run for president.

CNN reached out to Cuomo's office for a response.

Danny Kanner, communications director for the Democratic Governors Association, mocked Perry's invite by referencing the governor's disastrous debate performance from 2011, in which he forgot the third of three federal agencies he would cut.

"A little free advice for Rick Perry: the fewer debates with anyone, the better. Oops!" he said in an email, linking to a clip of the moment when Perry struggled to remember the agency's name.