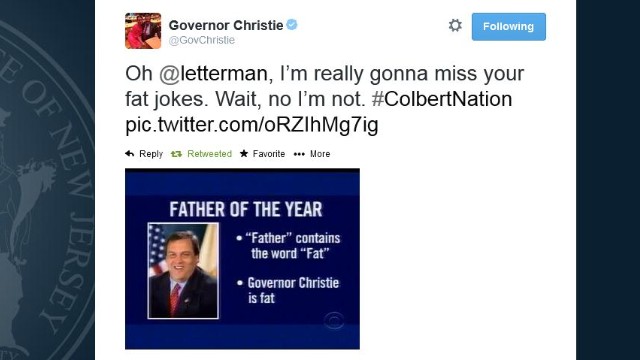 The morning after Letterman was joined by his successor Steve Colbert on "The Late Show," Christie made his excitement for Letterman's departure known in a tweet.

Christie's tweet came in response to a segment Letterman aired Tuesday that poked fun at both an award Christie won Monday as "Father of the Year" and Christie's weight, an issue the governor has publicly struggled with for years.

In a mock "CBS News Special Report" on Letterman's show, a narrated newscast jokingly explains why Christie won the award.

"The word Father contains the word 'fat,'" the narrator says while a bulleted graphic and picture of Christie is displayed on screen. "And Governor Christie is fat."

While Christie swung back at Letterman on Twitter this time, the governor played along with the comedian's jabs about his weight last year, pulling a donut from his pocket and nibbling away in front of Letterman during an interview on the program.

"I only care if you're funny," he told Letterman, talking about the fat jokes. "From my perspective, if the joke is funny, I laugh. If it's not funny, I don't laugh. But I've never felt like it was anything that bugged me all that much."

How Christie surgery weighs on 2016

Opinion: Chris Christie and our biases about weight