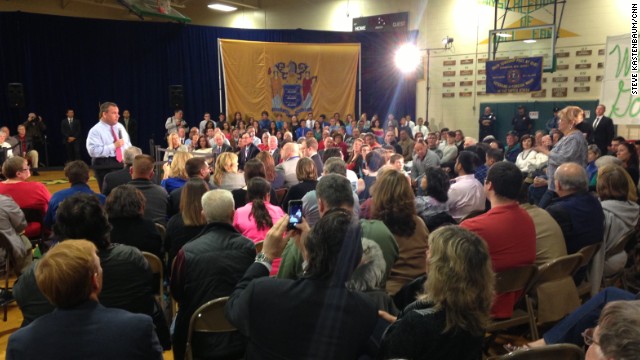 Christie denies divisive culture, says he would have stopped lane closures had he known

(CNN) – If Gov. Chris Christie’s administration had come to him beforehand and told him of the plan to close down access lanes at the George Washington Bridge last September he claims he would have stopped them.

“I knew nothing about it, had nothing to do with it, and if anybody had ever come to me and told me they were going to do this I would have stopped it,” the governor said at his 120th town hall meeting in Brick, New Jersey on Thursday.

The remarks came when an audience member asked Christie how to defend the governor to friends and relatives. Len Ludovico, a retired teacher from Point Pleasant Beach, said he thought Gov. Christie was too intelligent to risk his political career and his integrity on “something as petty as lane closures at the George Washington Bridge.”

The 71-year-old then asked the governor how he should defend Christie against allegations that he “created a culture that would have approved of such behavior.”

“The allegation that somehow this was a culture that was created just doesn’t have any basis in fact,” Christie said.

He told an audience of about 500 people that his record of creating bipartisan consensus on a variety of issues and policies shows that he has not created a culture of divisiveness. He blamed such allegations on partisan politics.

“Some days I don’t mind it. Some days it gets me really upset. But in the end this is the business we’ve chosen and you got to deal with it,” said Christie.

The question about the allegations of politically-motivated lane closures in Fort Lee, a controversy that has roiled the governor’s administration for months now, came at the end of a town hall meeting that focused on the Superstorm Sandy recovery effort. The process has been plagued by delays, mounds of red tape and frustrated homeowners.

But Christie asserted that New Jersey had made tremendous progress in recent months. The governor said they’ve helped more than 18,200 of the 18,500 families who applied for assistance through the Homeowner Resettlement Program and 70% of the funds went to low and middle income families.

The governor said more help is on the way with another $1.4 billion in federal aid expected to enter the pipeline in mid-May.

Even so, two men in the audience told tales of frustration as they tried to get their homes repaired. They said the rental assistance they received through Sandy recovery programs would run out on April 30th and with nowhere else to turn they feared they would be out on the streets.

Gov. Christie sounded a familiar refrain as he placed much of the blame on Congress’ slow response and the federal government’s red tape. But he told the men that state-run programs had improved and help is available to them.