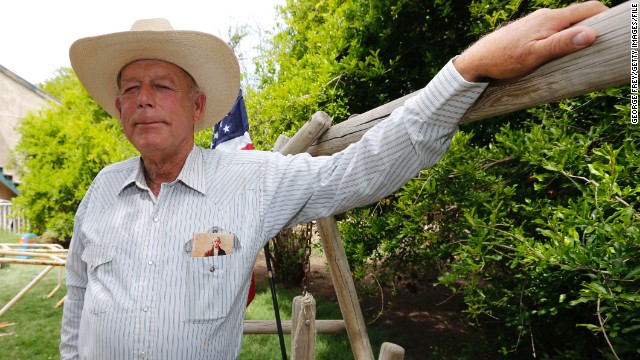 HARRY REID: ‘HATEFUL’: “To advance his extreme, hateful views, Bundy has endangered the lives of innocent women and children. This is not a game.”

WHILE REPUBLICANS DISTANCE THEMSELVES...

RAND PAUL: ‘OFFENSIVE’: “His remarks on race are offensive and I wholeheartedly disagree with him.”

REINCE PRIEBUS: ‘BEYOND THE PALE’: "Bundy's comments are completely beyond the pale. Both highly offensive and 100% wrong on race."

OBAMA: NEW SANCTIONS ‘TEED UP’ … Speaking alongside Japanese Prime Minister Shinzo Abe in Tokyo, U.S. President Barack Obama again ruled out any military solution in Ukraine but warned that the United States is "teed up" to impose further sanctions on Russia if it does not abide by the April 17 deal … But Russia sees things very differently, saying that according to the Geneva deal, Kiev must act to disarm the right-wing ultranationalists that Moscow blames for violence in Ukraine. – Ben Brumfield, Laura Smith-Spark and Victoria Butenko

INSIDE POLITICS: SUSHI AND ROBOTS, NOT SANCTIONS AND TRADE … On President Obama’s visit to Asia, we’ve seen him eat $300 sushi, view an archery demonstration and play soccer with a robot. What we haven’t seen is any movement on a key Pacific region trade agreement, any sort of development on new sanctions against Russia over its actions in Ukraine, or any pivot on the troubled U.S. effort to get chemical weapons out of Syria. – Z. Byron Wolf

READY, AIM: NRA PREPS FOR INDIANAPOLIS MEETING… The National Rifle Association holds its annual meeting this weekend with the gun debate cooling overall and pivoting to the states, where gun-control advocates are recalibrating around big money. The three-day event in Indianapolis is expected to draw 70,000 to its sprawling shooting, hunting and outdoor exhibits as well as rallies, seminars and concerts.

Gabriel Debenedetti ‏(@gdebenedetti)
Working the base? Marco Rubio will speak at the NRA annual meeting in Indianapolis on Friday.

THE BUZZ: GIRL GIVES FLOTUS UNEMPLOYED DAD’S RESUME … The children of Executive Office employees crowded into the East Room on Thursday to ask First Lady Michelle Obama a question as part of the White House’s annual celebration of Take Our Daughters and Sons to Work Day … One young girl seated in the front row took the opportunity to try to help her unemployed father. “My dad's been out of a job for three years and I wanted to give you his resume,” the young girl quietly said, before handing the First Lady a folded piece of paper. – Adam Aigner Treworgy

TRAIL TRIVIA
(Answer below)
What was the closest election in Senate history?

Leading CNNPolitics.com: Can Mr. Jones stay in Washington?
A 38-year-old mop-topped bachelor, (Taylor) Griffin is running to unseat (Rep. Walter) Jones, who has represented North Carolina's 3rd Congressional District for 20 years, in the May 6 Republican primary. It's one of the 2014 election's most intriguing primary fights, a face off that doesn't fit neatly into the tea party-versus-establishment narrative that's defined so much GOP infighting over the last four years.

Leading Drudge: U.S. President bows To Japanese Robot
ASIMO, an acronym for Advanced Step in Innovative Mobility, exchanged bows with the president before demonstrating that it could kick a soccer ball. "How about that, that was pretty impressive," Obama marveled after the demonstration. – Charlie Spiering

Leading HuffPo: Republicans Attack Obama For Weighing Immigration Changes
Senate Minority Leader Mitch McConnell and 21 other Republican senators are accusing President Barack Obama of disregarding the rule of law and the Constitution by considering administrative changes to the nation's deportations policy. In a letter Thursday, the senators say changes under consideration would amount to, quote, "near complete abandonment of basic immigration enforcement." – Erica Werner

Leading Politico: The left's secret club plans for 2014, 2016
Some of the country’s biggest Democratic donors — including Tom Steyer and Jonathan Soros — are huddling behind closed doors next week in Chicago with union bigwigs and progressive superstars like Bill de Blasio to plan how to pull their party — and the country — to the left. The setting is the annual spring meeting of the Democracy Alliance, a secretive club of wealthy liberals that’s the closest thing the left has to the vaunted Koch brothers’ political network. – Kenneth Vogel

Leading New York Times: F.D.A. Will Propose New Regulations for E-Cigarettes
The Food and Drug Administration will propose sweeping new rules on Thursday that for the first time would extend its regulatory authority from cigarettes to electronic cigarettes, popular nicotine delivery devices that have grown into a multibillion-dollar business with virtually no federal oversight or protections for American consumers. – Sabrina Tavernese

- Perry on Bundy standoff: Remember Waco –
TEXAS GOV. RICK PERRY ON CBS THIS MORNING: “We saw a huge debacle in Waco, Texas back a decade-plus ago with how they dealt with that issue. I hope our government officials are very, very wise and use common sense when it comes to these issues of conflict within the borders of the United States.”

- Hannity: Guilt by association with Cliven Bundy is unfair -
SEAN HANNITY ON HIS RADIO SHOW: Bundy’s “comments are beyond repugnant to me. They’re beyond despicable to me.” But “people who for the right reasons saw (the Nevada cattle grazing standoff) as government overreach are (now) branded because of the ignorant, racist, repugnant, despicable comments of Cliven Bundy.”

- Buffett unsure on minimum wage hike -
WARREN BUFFETT TO CNN’S POPPY HARLOW: “I’ve thought about it for 50 years and I don’t know the answer on it … I just don’t. In economics you always have to say, ‘And then what?’ And the real question is, are more people going to be better off if it is … raised? I don’t know the answer to that. I know that if you raise the Earned Income Tax Credit significantly that that would definitely help people who got the short sticks in life.”

- Rush: I’m the cure for what ails Meet the Press -
RUSH LIMBAUGH ON HIS NATIONALLY SYNDICATED RADIO SHOW: “This is mind boggling. Are they telling us that there is nobody that is any better psychologically prepared at NBC to host this show? Hell I could do it. I could bring the ratings of this show up back to where they were inside of a month! With no guests! Inside of a week with no guests! That’d be a problem. They’d make me do guests. I mean, it’s ‘Meet the Press.’”

- Malaysian PM refuses to admit Flight 370 is lost -
PRIME MINISTER NAJIB RAZAK TO CNN’S RICHARD QUEST: “At some point in time I would be (willing to admit the plane is lost), but right now I think I need to take into account the feelings of the next of kin, and some of them have said publicly that they aren’t willing to accept it until they find hard evidence.”

Gut Check Flash Back: RAZAK ON MARCH 24: It is “with deep sadness and regret that I must inform you that, according to this new data, flight MH370 ended in the southern Indian Ocean."

Senator Bob Casey (‏@SenBobCasey)
My thoughts and prayers are with the families and friends of the Americans killed and the medical personnel injured in Kabul this morning.

David Folkenflik ‏(@davidfolkenflik)
>@JoeNBC (Scarborough) on conservative (and Fox) embrace of Bundy: "They... pick their friends based on who their enemies are." http://www.mediaite.com/tv/scarborough-bundys-conservative-supporters-exposed-by-his-racist-remarks/ …

Stacy Martinet ‏(@stacymartinet)
"Don’t ever underestimate her. She can go as far as she likes." Alfonse D'Amato on Kirsten Gillibrand (in TIME) http://time.com/70842/kirsten-gillibrand-2014-time-100/ …

Matt Berman (‏@Mr_Berman)
Rand Paul on Time 100: "excited to be a part of the national debate" and appreciates "kind words" from McConnell. http://www.nationaljournal.com/politics/mitch

Charlie Mahtesian ‏(@charlieNPR)
Mitch McConnell on Rand Paul: "The real secret to Rand’s rapid rise...to the center of American politics is his authenticity"

Greg Sargent ‏(@ThePlumLineGS)
Gender gap in new Q poll of Colorado a reminder why Ds will make Personhood such a big issue this fall: http://www.washingtonpost.com/blogs/plum-line/wp/2014/04/15/coming-this-fall-in-the-senate-races-a-fight-over-personhood/ …

Kevin Bohn ‏(@KevinBohnCNN)
Who in the Bush family wants @JebBush to run? Tune in @CNNSitRoom in 6p hour for new information from Gloria Borger. #2016

The closest election in Senate history was the 1974 New Hampshire race between Republican Louis Wyman and Democrat John Durkin. The campaign was followed by multiple recounts, including one that showed a two-vote margin.

Wyman was the first one to come out on top, edging Durkin on Election Day by 355 votes. Durkin, however, immediately demanded a recount and subsequently ended up on top by 10 votes. Wyman then demanded another recount, and wound up on top by a margin of two votes.

Durkin then asked the Democratic-controlled Senate to review the election results. When the Senate proved unable to agree on a resolution to the matter, Durkin and Wyman agreed to hold another election on September 16, 1975. This time, Durkin won by an uncontestable 27,000-vote margin.