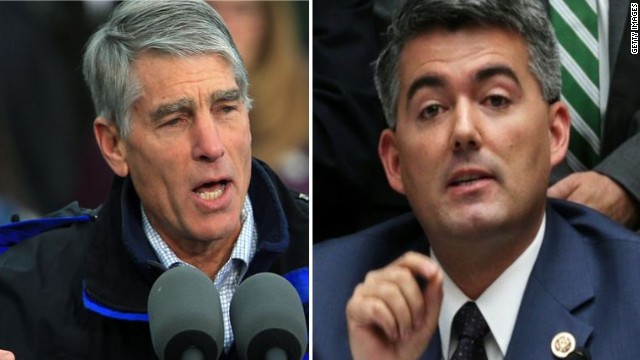 According to the poll, which was released Thursday, 45% of Colorado voters say that if the November general election were held today, they'd back first term Democratic Sen. Mark Udall, with 44% saying they'd support Rep. Cory Gardner, the all-but-certain GOP Senate nominee. Udall's one percentage point margin is well within the survey's sampling error.

The poll indicates a wide gender gap, with Udall leading 52%-35% among women and Gardner ahead 53%-38% among male voters. Udall attacked Gardner over the GOP challenger's stance on abortion, in his first TV ad, which hit the airwaves earlier this week.

Udall has the support of nine out of ten Democrats, Gardner has the backing of nearly nine out of ten Republicans and independent voters are divided between the two candidates.

Fourteen percent of Colorado voters list the federal health care law as the most important issue to their vote this year (second only to the economy). Those voters back Gardner over Udall by 21 points.

The survey indicates Colorado voters opposing the Affordable Care Act, better known as Obamacare, by a 59%-37% margin. Americans for Prosperity, a conservative outside group, has spent over $1 million to run television commercials in Colorado that criticize Udall for his support for the health care law.

Colorado voters are split at 42% on whether they approve or disapprove of the job Udall's doing in the Senate and by a 46%-40% margin, they say he doesn't deserve to be re-elected. And President Barack Obama's approval rating in the state stands at 38%. Presidential approval ratings are considered an important indicator in midterm elections.

"In a race that is both too close to call and one of the prime targets for Republicans trying to take back the Senate, Colorado Sen. Mark Udall might best focus on one predominant concern – the economy," said Tim Malloy, assistant director of the Quinnipiac University poll.

Gardner initially decided against running for the Senate last year, but he changed his mind and announced in February that he would launch a bid. After Gardner jumped in, three other GOP candidates dropped out of the race. In Gardner, who was first elected to the House in 2010, the GOP has the top tier candidate they were looking for to take on Udall, who Republicans consider vulnerable.

Democrats hold a 55-45 majority in the Senate (53 Democrats and two independents who caucus with the party), but are defending 21 of the 36 seats up in November, with half of those Democratic-held seats in red or purple states, like Colorado.

Paul early leader of the 2016 pack in Colorado

In a possible 2016 presidential showdown, Paul edges out Clinton, the former secretary of state, 48%-43%, among Colorado voters. As with the 2014 Senate race, there is a large gender gap.

In other hypothetical White House matchups, Clinton is deadlocked at 42% with New Jersey Gov. Chris Christie, is all tied up with former Arkansas Gov. Mike Huckabee (45%-44%), and has a five point advantage (45%-40%) over former Florida Gov. Jeb Bush.

The Quinnipiac University poll was conducted April 15 – 21, with 1,298 registered voters in Colorado questioned by telephone. The survey's overall sampling error is plus or minus 2.7 percentage points.