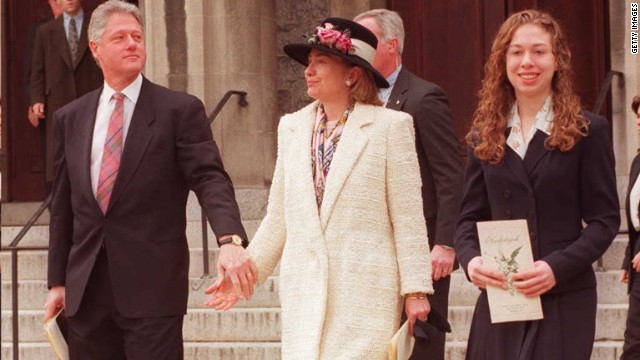 And in synthesizing her view of Methodism's social gospel, Clinton's remarks seemed to come close to describing her presidential thought process, where the former first lady has acknowledged she is thinking about running for president in 2016.

"Even when we are tired and all we want to do is go away by ourselves to a secluded place and rest awhile," Clinton said, "even then, especially then, let’s make it happen."

Clinton focused largely on the social gospel teachings of Methodism. "Like the disciples of Jesus, we cannot look away, we cannot let those in need fend for themselves and live with ourselves," she said to applause. "We are all in this together."

Although faith has long been a part of Clinton's life, she rarely addresses it in public speeches. Saturday's remarks were a departure from that.

Clinton cited the Scripture Mark 6:30-44 - where Jesus instructs his disciples to organize their followers into groups and to feed them with five loaves of bread and two fish - as the central biblical passage of her speech. She jokingly called the story "the first great pot luck supper," and said she has always been fond of the passage.

"In the story, when the hour grows late and the crowd grows hungry, the disciples come to Jesus and suggest they send away the people to find food, to fend for themselves," Clinton said. "Jesus said ‘No, you feed them.’ He was teaching a lesson about the responsibly we all share to step up and serve the community, especially to help those with the greatest need and the fewest resources."

In explaining the passage - and her affinity for it - Clinton pulled a great deal from her time as America's top diplomat. She mentioned her travels to Southeast Asia and meetings she had with women in Malawi.

Although Clinton's remarks were largely about faith, there were subtle undertones of politics and policy. She mentioned gender equality and urged those in attendance to push for equal pay and raising the minimum wage.

"Holding back women is not right, but it is also not smart," Clinton said, using a refrain she has used before.

Clinton's roots in Methodism are deep, and she described Saturday’s event as a "homecoming" for her.

Born into a conservative Methodist family and raised in Park Ridge, Illinois, Clinton spent a great deal of time and was confirmed in the local church – First United Methodist Church. 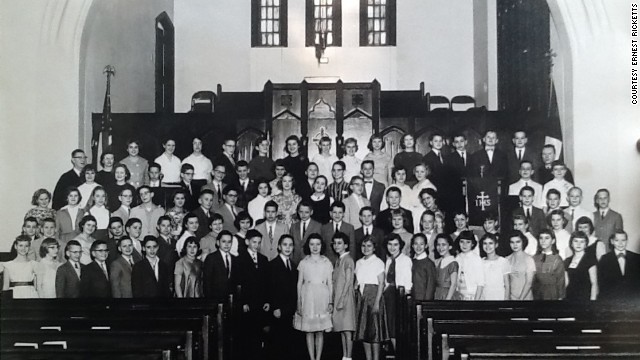 "I loved that church; I loved how it made me feel about myself; I loved the doors that it opened in my understanding of the world," she said Saturday. "When I think back on my growing up time, many of my memories are rooted in that church and the experiences that I had there."

Clinton's family was very involved in the church, too. Her father, a Republican and devout Methodist, would regularly pray, Clinton said on Saturday, and her mother taught Sunday school. She, on the other hand, went to summer Bible camps, attended youth fellowship and even was part of the group that cleaned and maintained the church's organ.

"I loved doing that," she said to laughs.

In the late 60s, when Clinton moved to Arkansas to marry Bill Clinton, she continued to attend Methodist services, despite the fact that her husband was a lifelong Southern Baptist. Clinton's daughter, Chelsea, was confirmed at First United Methodist Church in Little Rock.

Some of Clinton’s friends say she carries a Bible with her and regularly pulls from it. Some of Clinton's strongest mentors also came from the church, and none was more influential than Don Jones, Clinton's youth minister from 1961 to 1963 in Park Ridge.

Jones, a liberal academic from South Dakota, exposed Clinton to the world outside of her conservative Chicago suburb. Through his "University of Life," Jones took his nearly 60 students to debates with atheists, discussions with a rabbi and into Chicago's South Side to experience the drugs, gangs and despair that defined the neighborhood in the early 60s.

"He went full speed ahead to help us understand, question, search for the role we wanted faith to play in our lives," Clinton said. "He was the first person that I had ever met who taught me and my other young compatriots to embrace the idea of faith in action."

Clinton went on to say that Jones "went out of his way" to expose his charges who lived in the largely "sheltered, middle class, all white community" of Park Ridge to the outside world.

Jones introduced Clinton to the teachings of Dr. Martin Luther King Jr. by taking her to one of his speeches in the spring of 1962. Clinton was able to shake hands with King - something Jones organized - and has since called that moment one of the most formative of her life.

When Jones died in 2009, Clinton described him as "a lifelong friend and mentor" and wrote in a letter that he "opened up a new world to me and helped guide me on a spiritual, social and political journey of over 40 years."

Unlike her other events, Clinton's appearance at the Methodist women's conference was not a paid engagement. According to organizers, she also declined to accept an honorarium.

Richards introduced Clinton at the event, highlighting her career, her life in the Methodist church, including the fact that Clinton is a member at a United Methodist Church in New York.

This was Clinton's first speech to the United Methodist Women Assembly, however she, as first lady, spoke to the faith's General Conference on April 24, 1996.