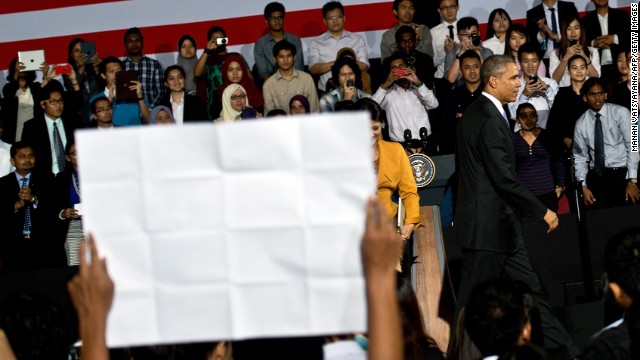 A student leaders holds up a sign as President Barack Obama leaves after an interaction at the Young Southeast Asian Leadership Initiative (YSEALI) Town Hall during a visit to University of Malaya in Kuala Lumpur on April 27, 2014. (Getty Images)
April 27th, 2014
09:13 AM ET

Small signs of dissent during Obama’s town hall in Malaysia

Kuala Lumpur, Malaysia (CNN) – In a country with a questionable human rights track record that has left some Malaysians hesitant to speak openly against their government, there were small signs of dissent during President Barack Obama’s town hall forum at the University of Malaya on Sunday.

And they literally were small signs - as Obama spoke about the importance of showing respect for those he disagrees with, several audience members stood and displayed handheld signs.

“For example there’s a note over there,” Obama said. “I don’t know what those young people are putting a note about.”

The signs included “R4BIA,” an Islamist symbol for a new Muslim brotherhood and the words “NO TPPA,” in opposition of the Trans-Pacific Partnership Agreement, which Obama is in Asia to promote.

The silent protest lasted only seconds before security guards removed the signs and asked the students to sit down.

“We want the government itself, the Malaysian government, to reconsider. To not sign the TPPA. Because we believe if they sign the TPPA, they actually sign away our future,” said student protestor Adam Fistival Wilfrid after the forum.

The relatively bold move – by Malaysian standards – of disrupting a highly promoted appearance by the first sitting U.S. president in 48 years is a sign of Malaysia’s changing political climate.

During last year’s elections, the Opposition Party came closer than ever to unseating the dominant Barisan Nasional (BN) Party, which has controlled the Malaysian parliament for decades but has seen its power erode in recent years.

“With this attention, I hope that it will keep the government more accountable to its actions. I also hope that some positive change will come from this attention,” said Malaysian student Kelvin Yee.