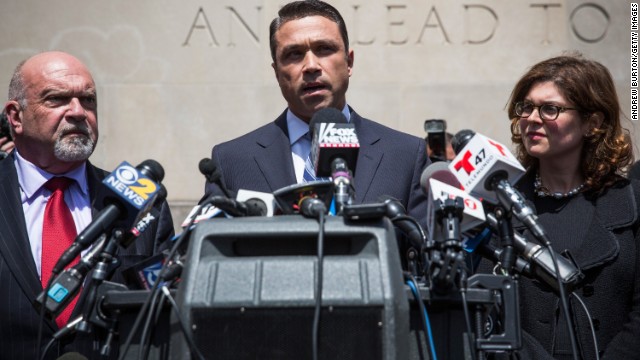 Grimm: 'I'm not taking a leave of absence'

Washington (CNN) - One day after being indicted for various charges in a New York federal court, Rep. Michael Grimm returned to Capitol Hill and pledged to stay there.

"I'm back to work doing what the people pay me to do: represent them. So that's what's gonna continue going forward," the New York Republican told CNN.

Grimm stepped down Monday night from his post on the House Financial Services Committee, hours after the second-term Republican, who represents New York's 11th Congressional District, entered a not guilty plea on charges that include mail fraud and hiring undocumented workers.

The congressman was released on bond Monday and promised to fight the charges, which he described as a "political witch hunt."

He also vowed to keep serving in his role as congressman and indicated he planned to continue with his re-election campaign this fall in his district, which includes the entire New York City borough of Staten Island and parts of Brooklyn.

Grimm said Tuesday he resigned from his committee seat because he doesn't want his legal battles to be a "distraction" to the committee's work.

"It's a very important committee. I'm completely committed to it. This is temporary, and I'll be back on the committee soon as this is over," he said.

The congressman said his colleagues "have been great," and he believes their support will "continue."

Asked if he would be willing to take a leave of absence if so requested by House GOP leadership, Grimm said he would not consider that as an option.

"I'm not taking a leave of absence," he said. "I'm here to work and that's what I'm going to continue to do."

While Grimm says he's back to work, he was not seen at the weekly House GOP conference on Tuesday–a meeting he typically attends.

Boehner was pressed further Tuesday about Grimm's future and whether the speaker would support the congressman in his re-election fight this fall, but Boehner did not weigh in on the issue.

"I think all members should be held to the highest ethical standards. Mr. Grimm is under indictment. He resigned from his committee assignment. And I think he made the right decision," he said after the GOP gathering.