"PTS is an injury, which means it's fixable over time," Bush said before joining a group of Afghanistan and Iraq veterans for the fourth annual W100K mountain bike ride that he hosts at his ranch. "A lot of the experts don't view PTS as a disorder. It's an injury, and that's really important ... to eliminate stigma."

END_OF_DOCUMENT_TOKEN_TO_BE_REPLACED

Graham to CNN: Jay Carney 'believes that we're all dumb' 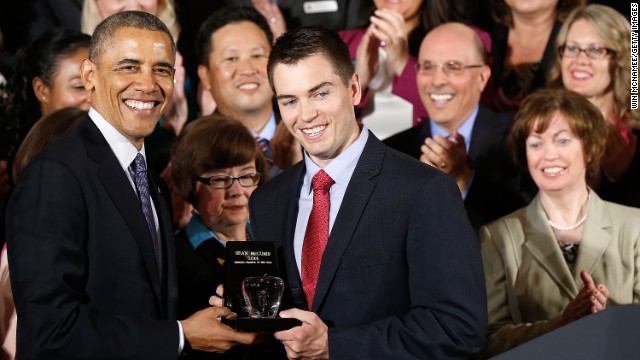 Sean McComb, 30, teaches at the Patapsco High School and Center for the Arts in Baltimore. He said he chose the teaching profession because of the influence of one of his high school teachers.
END_OF_DOCUMENT_TOKEN_TO_BE_REPLACED

Massachusetts governor backs away from tweet on sexual assault

The tweet, sent Wednesday from @Mass.gov, read "Sexual assault is always avoidable" with the hashtag #SAAM and a logo for sexual assault awareness month.

END_OF_DOCUMENT_TOKEN_TO_BE_REPLACED

Biking with Bush: Former President opens up about veterans, Jeb 2016

The rugged 100-kilometer mountain bike ride cuts through the Texas hill country and was designed to keep a fitness freak on his toes.

Washington (CNN) - The House passed legislation Thursday in a 402-14 vote that will provide funds for expanded sexual harassment training for all members and their staff.

Democratic Rep. Jackie Speier of California introduced the measure as an amendment to the legislative branch spending bill. The legislation allocates $500,000 from that bill to pay for the effort, and Speier ultimately wants the training to become mandatory.
END_OF_DOCUMENT_TOKEN_TO_BE_REPLACED

(CNN) - Mitt Romney is playing an increasingly large role in campaign politics, especially for a man who says he has no intention of running for higher office again.

Thursday the former Massachusetts governor and two-time White House candidate gave his support to a GOP Senate candidate in Oregon. The endorsement is the latest sign that the 2012 Republican presidential nominee plans to play an influential role in helping to shape the future of his party.

END_OF_DOCUMENT_TOKEN_TO_BE_REPLACED

Clintons' relationship with media still testy after all these years

(CNN) - During the Arab Spring, Hillary Clinton heralded Al-Jazeera's coverage of momentous events in Egypt in 2011.

"Like it or hate it, it is really effective," Clinton said of the network at a congressional hearing while she was secretary of state.

(CNN) - Jeb Bush has a wide lead over other potential 2016 Republican White House contenders in the battle in Florida for GOP presidential nomination, according to a new poll of Sunshine State voters.