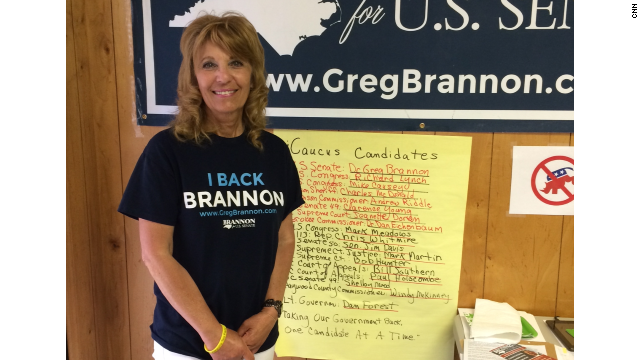 Asheville, North Carolina (CNN) - On the eve of North Carolina primary balloting, the state tea party is not backing down, despite reports the Republican establishment is fighting to "humiliate" and win big.

Will the tea party be humiliated in the primaries?

"The establishment – they want to keep their turf and they look at us as a threat," Jane Bilello, chairman of the Asheville Tea Party, told CNN on Monday.

It's a turf war her group is willing to fight.

While the establishment is putting its money behind U.S. Senate candidate Thom Tillis, the speaker of the North Carolina House, the tea party-affiliated groups have backed ob-gyn Dr. Greg Brannon.

They say he can recite the Constitution, the Federalist Papers and the Declaration of Independence from memory. A third candidate, Baptist pastor Mark Harris, is also running with the backing of Christian conservatives.

"We need fiscal responsibility and we make sure our candidates are committed to that," she said at the Brannon headquarters in Asheville, where the office housed a dozen volunteers making phone calls on his behalf.

The primary race has become a proxy war between the tea party and the entrenched wings of the party. But that's not new, said Bilello, pointing to their uneasy relationship since the modern day tea party's creation in 2009.

"What they seem to forget is that we turned Congress in 2010," Bilello said, referring to the Republican wave that elected 63 Republicans to the House and handing control to the GOP.

The establishment has been burned before, losing primaries to further right candidates that went on to lose against a Democrat in the general election. In North Carolina, the establishment thinks Tillis is the person who can beat Democrat incumbent Kay Hagan in November.

Tillis not only has the backing of the Grand Ole' Party but also of big money. Only 4% of contributions to Tillis' campaign are in the form of small contributions compared to 57% of small-dollar contributions to Brannon, according to the Center for Responsible Politics.

Tillis' large-dollar donors have created a war chest totaling $3 million while Brannon has only $206,000 on hand.​

But Bilello said that if Tillis wins, he might not have something he will need in November - her groups' endorsement and perhaps more votes.

"Just because a Republican wins the primary does not mean we endorse them," she said.

While Republican voters usually participate in midterm elections, the party is trying to take control of the Senate and will need every vote possible.

A new CNN poll released Monday gave Republicans a 1-point advantage over Democrats when respondents were asked to choose between a generic Republican candidate and a generic Democratic one.

"A lot of people are disgusted in voting because they feel they no longer have a choice between the two major parties," Bilello said. "People will look at (Tillis) as Mr. Establishment."

CNN's Peter Hamby and Paul Steinhauser contributed to this report.