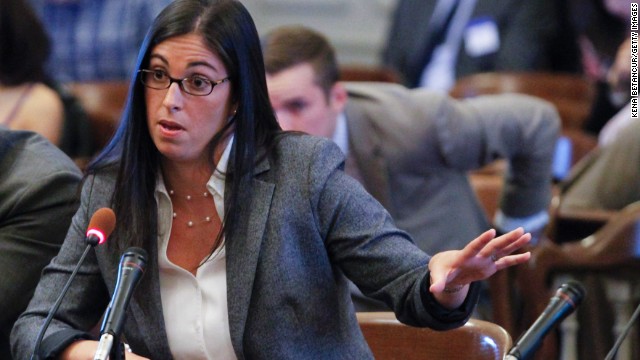 Trenton, New Jersey (CNN) – A former official who worked for New Jersey Gov. Chris Christie said her office never deliberately put off mayors who disagreed with the administration, and denied claims it kept a secret list of officials to be ignored.

Christina Renna also told a state legislative committee investigating a political scandal roiling Christie’s administration that a central figure in the controversy, Bridget Kelly, could be a difficult manager who was overwhelmed and not always good at making decisions.

Renna testified under subpoena in the probe of whether Christie allies orchestrated traffic jams last year at the foot of the George Washington Bridge in Fort Lee to punish that town’s mayor for not endorsing Christie for reelection.

The scandal has called into question Christie’s blunt governing style and clouded a potential 2016 presidential candidacy.

Christie has said he knew nothing about the traffic jams until after they occurred.

Renna is the first of five people subpoenaed by the special committee in Trenton to testify under oath about the scandal. Her interaction with Kelly was a key topic on Tuesday.

Kelly was fired in January as a Christie deputy chief of staff following the disclosure of a now-infamous email – "Time for some traffic problems in Fort Lee" – that was sent to another Christie ally at the center of the mess.

Since, she has successfully fought the committee’s attempt to subpoena her for documents and other information.

In her testimony on Tuesday, Renna denied any knowledge or involvement in the gridlock caused by sudden closures of access lanes to the nation’s busiest bridge over several days in September.

But she explained her role serving Kelly in the state’s intergovernmental affairs office.

Its staff played a big part in seeking endorsements from mayors during Christie’s campaign last year. Renna said endorsement work was only done outside of office hours.

Her testimony centered in part on an internal report conducted by lawyers hired by Christie’s office that cleared the governor of any wrongdoing in the scandal.

Critics contend the review was incomplete, and Renna testified that it contained errors from her own interview with those investigators.

For instance, Renna pointed to a memo from her interview saying that she believed staff in her office were given “mandatory directives” to not “rush to return” phone calls from mayors considered out of favor with the intergovernmental affairs office.

Lawmakers grilled her over why a nonpartisan, governmental unit was under such instructions. But Renna reiterated that she never used the term “mandatory directive” in her interview.

“That was their characterization. They are words I would never use,” she said, adding that the term “mandatory directives” was “most alarming to me because it’s aggressive language, and it’s not language I would have used.”

She later said during the hearing that the memo of her interview was largely accurate, aside from the errors she mentioned.

She also denied the existence of a “hands-off” list of mayors, as referenced in a text message exchange between herself and a colleague. She was pressed to provide more details.

“There’s not a formal list,” Renna said. “It’s not like there’s a secret, hidden list out there that is labeled ‘hands-off.’ It doesn’t exist. This was more conversational in tone.”

She said staff members were never told not to return a certain mayor’s phone call, but rather to pull back on being proactive in reaching out to those individuals.

“I have racked my brain, and I can’t think of one example when we were not responsive to a mayor that called, whether or not they were in favor or not in favor of the administration,” she said.

Renna, who reported to Kelly and worked closely with her, also gave more details about her superior’s personality.

She said Kelly could be a very good manager sometimes but could also be difficult. Renna said she frequently tried to placate Kelly, whom she described as someone who was overwhelmed and wasn’t good at making decisions.

She said she remembered Fort Lee Mayor Mark Sokolich was on the list of potential Democratic endorsements for Christie, but he was taken off sometime in April 2013.

As journalists and state lawmakers started looking into the lane closures, Renna recalled a night in December when Kelly called and asked her to delete an email related to Sokolich being angry during the closures. Renna, however, kept a copy.

Lawmakers questioned Renna as to why she didn't come forward with the email at the time, but Renna said she simply thought Kelly was being paranoid and felt "fearful" of "crossing" her boss.

On January 8, a local paper broke the news that the gridlock could have been a case of political retribution. Renna grew emotional Tuesday while talking about first learning the news.

“We were all completely in shock,” she said. “It was a day of a lot of tears in the office. A lot of people were very upset about what transpired...My door was a revolving door that day of people upset.”

The bridge scandal is also being investigated by federal prosecutors, who have empaneled a grand jury.