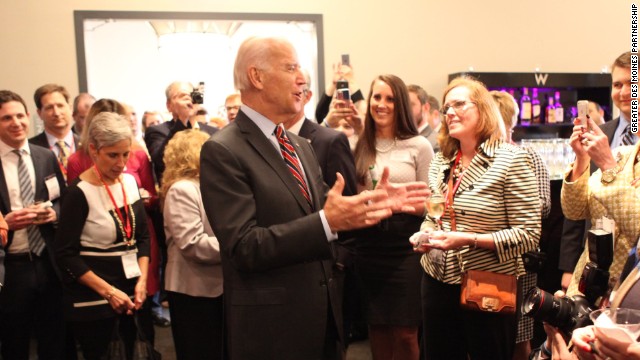 Washington (CNN) - It's not so noteworthy for Vice President Joe Biden to stop by a social reception. But what was noteworthy about the one he attended Wednesday evening was its audience – full of Iowans.

Biden stopped by a party at a Washington hotel for a group of 195 Iowans from the Greater Des Moines Partnership – a group aimed at promoting economic development in Des Moines. The group of Iowans are on a three-day trip to the nation's capital to help spur job creation in Des Moines and lobby Congress.

Biden spent about 45 minutes at the reception mingling with the group, which also included DC based staff from various Iowa congressional officials, according to Susan Ramsey, a spokeswoman for the partnership. He didn’t make any formal remarks to the attendees.

“He spent a great deal of time,” Ramsey told CNN. “We are used to being courted by anyone even being rumored to be a potential candidate.”

As both Democrats and Republicans are in the midst of deciding the 2016 presidential nomination calendar, Iowa‘s caucuses are expected to continue to lead off the voting.

Hillary Clinton has a wide lead over Biden among Iowa voters with 63% saying she would be their first choice in caucus voting while 10% would back the Vice President if they both seek the Democratic nomination, according to the most recent polling in a potential Democratic 2016 showdown.

The partnership visit was first reported by the Des Moines Register.

Biden had declined an invitation last year to attend. After he accepted one for this year, group officials kept it secret from those attending.

This is not Biden’s first recent outreach to Iowans. Last September the Vice President was the star attraction at one of Iowa’s iconic Democratic gatherings – the steak fry sponsored by longtime Sen. Tom Harkin. At the event the Vice President gave a strong defense of the Obama administration’s policies saying “The president and I have had a laser focus on one thing: raising up the middle class.”

CNN’s Kevin Liptak and Steve Brusk contributed to this story.