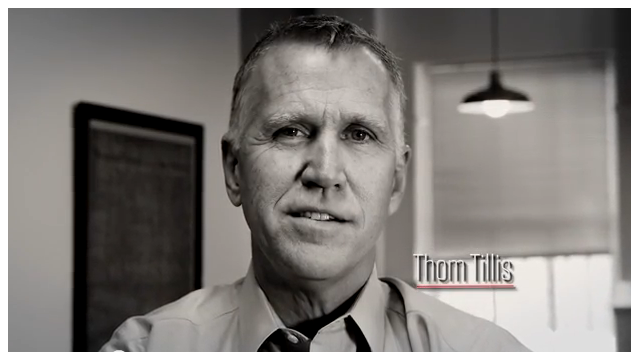 Washington (CNN) - The National Republican Senatorial Campaign is making an online push starting Thursday to familiarize voters in North Carolina and donors across the county with Thom Tillis, the GOP's new Senate nominee in the Tar Heel state.

The NRSC is blasting a biographical video of the North Carolina House speaker, using YouTube as platform for distribution across blogs and social networks.

In the video, Tillis discusses his humble childhood, growing up in a working class family.

The NRSC, which assists Republican senators running for re-election and GOP candidates running for the Senate, says the video is a continuation of their "Six in 14" series, which introduces their candidates to voters, donors, and other supporters.

Tillis topped 40% of the vote Tuesday in the Republican Senate primary in North Carolina, avoiding a runoff in July.

Tillis beat a bunch of more conservative candidates for the chance to face off this November against first-term Democratic Sen. Kay Hagan, who is considered very vulnerable in the general election. Flipping her seat and five others held by Democrats would give Republicans control of the Senate.

More importantly, while none of the candidates in the GOP primary, including Tillis, raised or spent a lot of money in the campaign, the state House speaker won the backing of the U.S. Chamber of Commerce and American Crossroads, two outside groups that combined spent $2.6 million to run ads in favor of the candidate. That spending dwarfed the money shelled out by outside conservative groups that backed Greg Brannon, a first time candidate endorsed by Sen. Rand Paul, who finished second in the Senate primary.

National Democrat argue that the competitive primary pushed Tillis too far to the right for the more mainstream electorate in November.

And Democratic Senatorial Campaign Committee deputy executive director Matt Canter wrote a memo that says "Rather than taking the fight to the Tea Party with moderate, mainstream candidates that can appeal to general election voters, the GOP establishment has embraced the Tea Party's candidates and policies in order to beat them – a recipe for defeat in November."