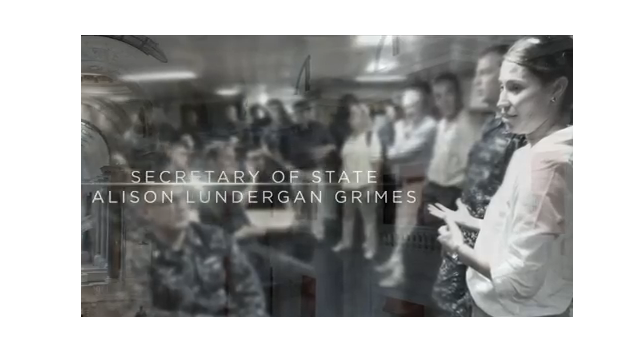 (CNN) - Kentucky Secretary of State Alison Lundergan Grimes is out with the first television commercial of her Democratic challenge against Senate Republican Leader Mitch McConnell.

The positive 30-second spot highlights one of Grimes top achievements as secretary of state: a law she pushed for last year that makes it easier for U.S. troops overseas to vote.

"After she met with our military in the Middle East, Alison Lundergan Grimes came home and brought Democrats and Republicans together to pass a law to ensure that every military vote would be counted," says the narrator in the ad.

That narrator is a mother named Lyne Dickey, who adds that "I almost lost my son in Iraq. But what upset him most was his ballot being lost in battle. Because of Alison, that will never happen again. Washington should work this way."

The campaign says they're spending more than $100,000 to run the commercial statewide in Kentucky on broadcast and cable television.

Grimes' first paid TV ad hits the airwaves more than a year after McConnell went up with his first spot. The five-term senator put up his first commercial in March of last year. Going up with TV ads more than a year and a half before an election is rare in congressional contests, especially for incumbents. When McConnell's counterpart, Senate Majority Leader Harry Reid, went up with commercials around a year before his November 2010 re-election, the move made political headlines.

While Grimes faces no serious opposition in Kentucky's May 20 primary, McConnell is fending off a primary challenge from the right from businessman Matt Bevin, who enjoys strong support from many tea party groups and influential conservative organizations. While the race has seen big spending - both by the campaigns and from outside groups - McConnell is expected to cruise to renomination.

While McConnell should easily win the primary, the general election, as of now, appears to be a different story. The most recent polling in the race indicates McConnell and Grimes in a dead heat.

That may be why the most recent TV spot by the McConnell campaign, released earlier this week, didn't even mention Bevin. The ad highlights how the senator's saved thousands of jobs in Kentucky.

Democrats hold a 55-45 majority in the Senate, but are defending 21 of the 36 seats up in November. Half of those Democratic seats are in red or purple states. Kentucky and Georgia are the only two states right now where the Democrats think they have a good shot at capturing a GOP held Senate seat.