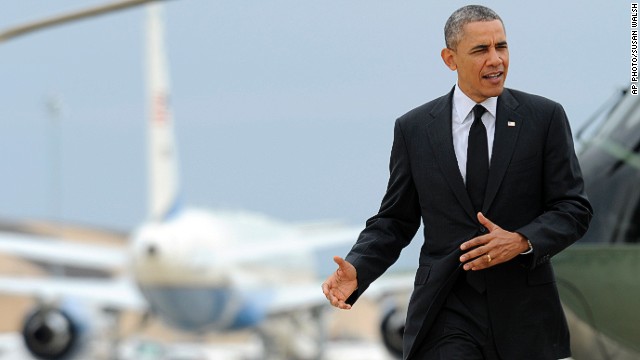 Obama to donors: 'Feel a sense of urgency' about midterms

Los Angeles (CNN) - Faced with difficult odds in November's midterm elections, President Obama's trying to fire up the base, and energize major donors to the Democratic party as he makes a major fundraising swing along the West Coast.

"My main message to all of you is feel a sense of urgency about this election. This is my last campaign, and I'm going to put everything I've got into it, but I need you to feel that this is just as important, because we can't afford to wait until 2016," the President said at a fundraiser in Los Angeles Wednesday night for both the Democratic Congressional Campaign Committee and the Democratic Senatorial Campaign Committee.

With the midterm contests starting to get overshadowed a bit by the next race for the White House, Obama asked that this November's elections not be overlooked.

"A lot of people here are already excited about 2016. You guys were excited about 2008. You got geared up for 2012. I am grateful. But I need some partners. I've got to have a Democratic Senate. And when you think about everything I was able to accomplish with Nancy Pelosi at the helm in the House, all the issues that you care about that we were able to advance when she was the leader, I think you've got a big stake in making sure that we've got a Democratic House as well," the President said.

And the President suggested that this year's contests are arguably as important as what happens in 2016.

"Nothing is going to happen magically, by the way, that changes in 2016 if we still have the same kind of voting patterns and the same dysfunction that we've got right now in Congress. We'll be stymied all over again.

Obama spoke at the home of Walt Disney Studios chairman Alan Horn and his wife Cindy. Among approximately 90 people attending, according to a pool report, were Barbra Streisand, Jeffrey Katzenberg, and James Brolin, as well as House Minority Leader Nancy Pelosi and Sen. Michael Bennet of Colorado, chairman of the DSCC.

Thursday the President headlines an event in at the Beverly Hilton Hotel for the Democratic National Committee before departing the Los Angeles area and heading to San Diego to serve as the main attraction at another fundraiser for the DCCC.

Later in the day, Obama flies north to San Jose, where he headlines two more events for the DNC.

The Democrats currently hold a 55-45 majority in the Senate (including two independents who caucus with the party). But the party's defending 21 of the 36 seats in play, with half of those Democratic-held seats in red or purple states.

In the House, Democrats need to pick up 17 GOP-held seats to win back control of the chamber, a feat political handicappers say is unlikely considering the shrinking number of competitive congressional districts.

The smaller and older electorate that usually turns out during midterm contests traditionally favors Republicans over Democrats. And thanks to Obama's low poll numbers – which are hovering just above all-time lows - and the unpopularity of the president's federal health care law, many in the GOP are increasing optimistic about their chances come November.

While there are a number of congressional Democrats facing challenging re-elections this year who aren't screaming for Obama to stump with them, they do look to the President to bring in the bucks. Because when it comes to fundraising, Obama remains the party's top rainmaker.