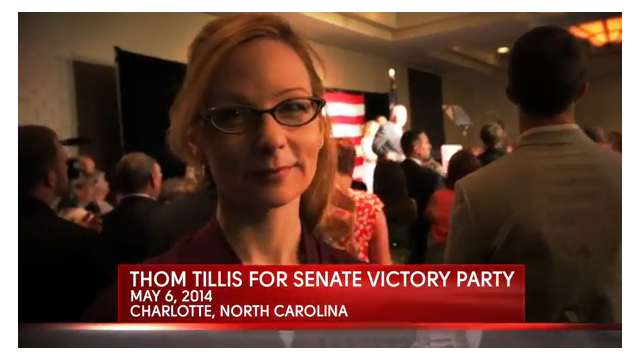 (CNN) - A leading pro-Democratic outside group is up with a new television commercial that attacks the GOP's new Senate nominee in North Carolina.

But the most interesting part of the ad by Senate Majority PAC is that the woman narrating the spot infiltrated Tuesday's victory celebration for the candidate, North Carolina House Speaker Thom Tillis.

The spot starts with a woman, who Senate Majority PAC says is a paid narrator, standing just a few yards from Tills as he gave his Republican primary victory speech Tuesday night. Tillis beat a bunch of more conservative candidates for the chance to face off this November against first-term Democratic Sen. Kay Hagan, who is considered very vulnerable in the general election. Flipping her seat and five others held by Democrats would give Republicans control of the Senate.

The spot then highlights what Senate Majority PAC says is a record by the state House speaker of giving tax cuts to the wealthy and corporations while raising taxes on North Carolinians.

The spot ends with the narrator, standing at the victory party, whispering "Thom Tills says he's up there for you, but he'll cost North Carolina families big time."

So how did the group get it's paid narrator and a person with a camera into the celebration?

A Senate Majority PAC official, who asked to remain anonymous to speak more freely, told CNN that the Tillis campaign blasted out an email announcing their primary night victory celebration, adding that "our crew went, walked right through the main doors. No one asked who they were, asked for a sign in, nothing."

While tracking of campaign events has been a common practice for years, this ad seems to take the practice to a new level.

"Their desperate tactics didn’t work when they meddled in the Republican primary, and they won’t work now."

Senate Majority PAC says it's spending $850,000 over two weeks to run the commercial statewide in North Carolina on both broadcast and cable TV.